My new favorite refrigerator magnet features a young woman with a come-hither look voicing some words of wisdom about food. "Potatoes make french fries, chips and vodka," she says. "It's like the other vegetables aren't even trying."

This quip, minus the flirty female, has been floating around the internet for a while now, it seems. Who originated it is unclear. If it wasn't the potato-checkoff folks, they might want to adopt it.

For too long, food purists have put potatoes down. "They're not a vegetable, they're a starch," the purists say. "Skip the fries and double down on the real veggies." This even though potatoes are rich in potassium, vitamin C, vitamin B6 and fiber. (USDA's dietary guidelines treat potatoes as a starchy vegetable and allow adults five to six cups aweek, though not as a substitute for red, orange and dark-green vegetables.) (https://www.choosemyplate.gov/…)

As the estimable Tamar Haspel puts it, the only real difference between potatoes and broccoli is that broccoli deliver nutrients without starch calories while potatoes deliver nutrients with them. (https://www.washingtonpost.com/…) If potatoes were classified as a grain, she argues, their nutritional value would be even more competitive.

"Compare 100 calories of baked potato to 100 calories of oatmeal," she writes, "and you find a bit less protein (3 grams vs. 4), a bit more starch (18 grams vs. 16) and a similar mineral profile (potatoes have more potassium, but oats have more selenium). But potatoes beat out oats in just about every vitamin, as well as fiber."

Or, to paraphrase the coy young thing, it's like the other grains aren't even trying.

Whatever you call potatoes -- vegetable, grain or starch -- people like them. That's the potato's ultimate revenge. Nutritionists can classify them however they want, but potatoes rank high with eaters where it counts -- taste and price. That they're healthier than they're given credit for is icing on the cake.

There's a lesson in this, I think, for farmers and ranchers and those who sell what farmers and ranchers produce: Don't be defensive. Critics bellow that the food system is "broken," but even the critics will often say yes when asked if they want fries with that burger. People like potatoes. They like cow's milk. They like real beef.

Observed from 30,000 feet, the food system is doing a good job of giving society what it used to want -- an abundance of affordable food. The system isn't broken, it just hasn't caught up with society's evolving demands. Ample inexpensive food is no longer enough. More and more Americans want food that they perceive as good for their health and the health of the environment.

Society's signals can be confusing, though. Many consumers, perhaps a majority, still care only about taste and price. Among the increasing number who would prefer food they see as healthy and environmentally friendly, some will pay more to get it while others won't. This may seem like a broken system, but it's actually just one that's in transition.

During this transition, many commercial farmers and ranchers feel under attack. However they feel, they should resist the impulse to be defensive. For example, farmers resent competitors who call plant-based products meat or milk, but their legislative campaigns against it come off as desperate efforts to protect turf rather than honest efforts to protect consumers. As a smart Washington ag lobbyist put it recently in a private conversation, "If you're fighting about what a competitor's product is named, you've already lost."

The grounds to fight on are taste and price, where farmers and ranchers have a great story to tell, and health, where they have a better story than much of the public realizes. Instead of fighting about what others may call their products, market the strengths of yours. Rebut any weaknesses the public perceives. Most of all, remember the lesson of the potato's revenge, that strong undercurrent of public support. People like much of what they're eating. The best thing to do is remind them of it every once in a while. 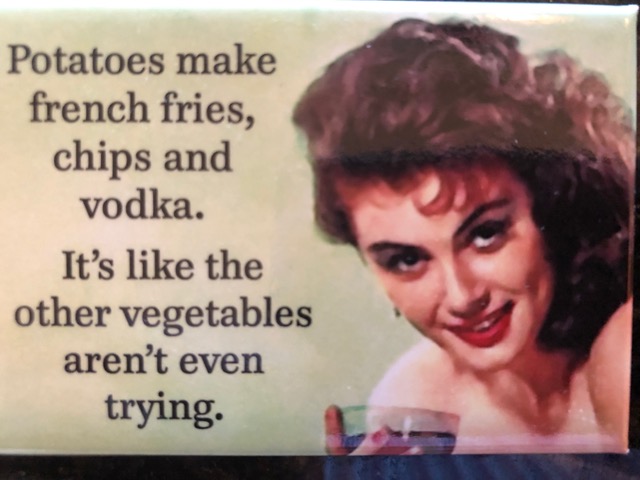