In this week of a very strong cold wave rolling through the central and eastern United States, the annual NOAA Arctic Report Card has details on a continued sustained warming trend in the far northern reaches of the earth. The report's executive summary notes that "Arctic annual surface air temperatures during October 2021-September 2022 were the sixth warmest dating back to 1900, continuing a decades-long trend in which Arctic air temperatures have warmed faster than the global average."

Other report highlights include:

-- Arctic sea ice extent (coverage) was higher than many recent years, but much lower than the long-term average. The Northern Sea Route and Northwest Passage were also largely open.

-- Satellite records from 2009 to 2018 show increasing maritime ship traffic in the Arctic as sea ice declines.

-- Wetter-than-normal conditions predominated over much of the Arctic from October 2021 to September 2022. Precipitation has increased significantly since the 1950s across all seasons and datasets.

-- The Greenland Ice Sheet lost ice in 2022, the 25th consecutive year of ice loss. In September 2022, the ice sheet had unprecedented late-season warming and surface melt.

-- August 2022 sea surface temperatures continued to show a warming trend that has been observed since 1982 for much of the ice-free Arctic Ocean.

-- Much of the Arctic continued to show increased ocean plankton blooms in 2022, as has occurred over the 2003-2022 satellite observation period.

-- While the populations of Arctic geese are stable or rising, many seabird species experienced their sixth consecutive year of a substantial die-off. Examples of bird types that are affected by this die-off are ducks, auklets, shearwaters, murres and puffins.

Research on how this ongoing far northern warming may be affecting central U.S. weather is in its second decade. One subject which keeps being referenced as an effect is that the northern jet stream track pattern may be much more of a wavy, loopy one rather than a more compact and consistent belt of wind circling the world.

This wavy pattern suggests more of an opportunity for cold waves to plummet far to the south out of the Arctic region rather than be confined to the northern land areas. This and other topics will be studied more; after all, the trends indicate that the increasing Arctic temperatures will not suddenly reverse course. 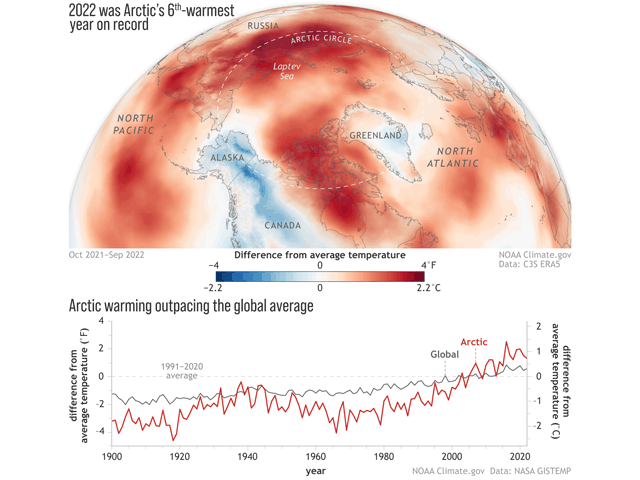