Much is being made about Argentina's heat, drought, and overall poor growing conditions for the third-straight year, and for good reason. But relatively little attention is being paid to the weather farther north in southern Brazil.

This area of the country started out with good weather during planting, but rainfall has trailed off in recent weeks. Since the start of October, precipitation in the state of Rio Grande do Sul has totaled roughly 60% of normal while temperatures have been reaching their normal summertime readings in the 30s Celsius (middle 80s to upper 90s Fahrenheit). With most of the corn and soybean crop entering into pollination, the lack of rainfall is starting to be a concern.

Rio Grande do Sul only accounts for about 5% of Brazil's total corn production, but grows roughly 20% of its first-season corn crop, and 14% of its soybean crop. What goes on in this state usually has a significant enough influence on total production, as we have seen when rains have been lacking the last two years under La Nina. This is a time period where precipitation largely stays the same, but soil moisture is on a general decline due to increasing temperatures and demand from crops. But this year follows the situation a lot like last year, where a lack of frequent precipitation put the state down toward some of its lowest soil moisture on record.

Some anecdotal reports of crop stress and failure are showing up in the state, highlighting the potential problems that may reveal themselves during harvest. Some private estimates are starting to cut their estimates for at least corn production in the state. The soybean crop's more critical period for rainfall is upcoming as more of the crop starts filling pods during the next couple of weeks.

Precipitation this week has been fairly absent and continues to be for the next few days. A cold front passing through will bring showers to the state Dec. 25-26, but coverage looks scattered, and amounts over 25 millimeters (about 1 inch) will likely be isolated. The state is likely to be dry for the week following that event, though that is not a certainty. The American GFS model has some showers getting back into the state over New Year's weekend, though that, too, looks brief.

By all estimates, Brazil is on pace to have record production in both corn and soybeans this marketing year. But if the weather does not cooperate, that record may not be as high as it is currently estimated to be. With global supplies very tight, the world can ill-afford to have many production issues. While those are already being discussed with regard to Argentina, we cannot take our eyes off of southern Brazil, either. 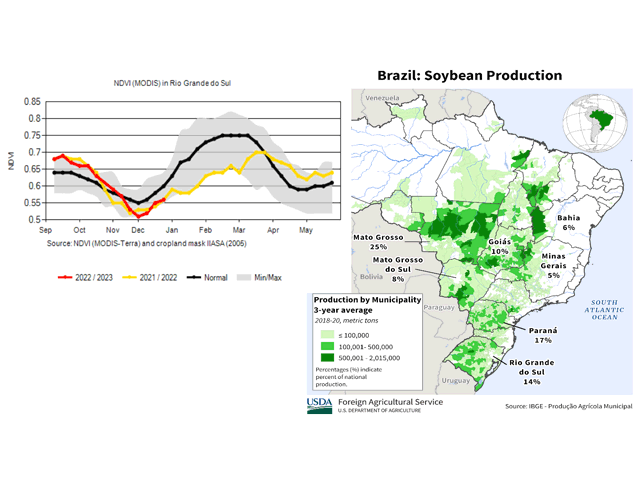