Cold air is settling into Western Canada and the Northern Plains on Dec. 20, just waiting to push southeast through the United States. It will do so over the course of the next few days.

The storm system attached to the cold air push will not linger during for three to four days as one did last week. But this one may create just as many issues across the eastern two-thirds of the country in the most important travel days in the lead up to the Christmas holiday. Heavy snow, very strong winds, blizzard conditions, severe weather -- all are on the table.

Last week, a storm produced its biggest impacts in the Northern Plains. More than 24 inches of snow, wind gusts of 45-55 mph, and drifting snow upwards of 10 feet highlighted the blizzard. Those conditions have set the stage to keep cold air bottled up in an arm of the polar vortex in Western Canada from moderating. The snow actually helps to reinforce the cold as temperatures today will fall by another 20 degrees Fahrenheit as the air pushes south and east Dec. 21-23 for all areas east of the Rockies, and even some areas to the west.

After getting by the Northern Plains, the air will moderate so that low temperatures approaching minus 40 degrees (both Fahrenheit and Celsius) in the Canadian Prairies and Northern Plains do not make it to the Gulf of Mexico.

However, consistent anomalies of 30 to 40 degrees below normal are going to be felt across most of the country for a few days. Below-zero F readings are likely for most of the Plains and even down to the Texas Panhandle, through the northern Delta and Tennessee for at least one night coming up. Under the right conditions, it may extend farther south as well.

The extreme arctic blast will occur along a cold front that will sweep through the nation. A strong low-pressure center is going to develop along that front, first from the Southern Plains Wednesday night and Thursday morning, then sliding up the front through the central Midwest on Thursday and into Friday.

The low will deepen rapidly across the Great Lakes due to the extreme difference in temperatures, commonly referred to by meteorologists as a "bomb cyclone". Doing so will pull significant amounts of moisture from the Gulf of Mexico northward into the Midwest.

The cold will cause most of this to fall as snow. Snow will develop for points as far south as Oklahoma, Arkansas, and the northern stretches of Mississippi, Alabama, and Georgia. Snowfall amounts there will be light. But farther north, through the heart of the Corn Belt, snowfall will be more impressive. Models are still working out the details, which is unfortunate for those trying to make holiday travel plans, but plowable snow will occur over eastern Nebraska and Kansas and points eastward north of the Ohio River. Some models are suggesting amounts in the core of the heavy snow over 12 inches around the Great Lakes. As the low wraps up and moves out early Saturday, lake-effect snows will continue for the rest of the weekend, piling up more snow in prone areas.

With the deepening low-pressure system, winds will increase substantially. Gusts of 40-50 mph look to be common for a lot of the Corn Belt after the front passes through. Winds could be stronger in some areas, especially in the flat Plains, near the open waters of the Great Lakes, and across the eastern Midwest as the low bombs out.

Severe weather will also be possible. While not as great of a set up as last week, a couple of lines of thunderstorms will be possible near the Gulf of Mexico Thursday into Friday. With more scattered clusters across the Southeastern coast. There may be just enough instability to produce a threat for tornadoes and damaging wind gusts.

The system will be a quick hitter though. Effects will only last about two or three days. But holiday travel will be affected across most of the country. Wind chill warnings are already being posted down toward the Gulf of Mexico, and the blizzard will affect both air and ground transportation across the Corn Belt. It may be the coldest Christmas Day on record for some areas east of the Plains.

Models suggest the cold will not last as long as previously thought. Last week, models produced a signature that suggested more seeping cold throughout the country. They have since reversed and the quick onset will also mean a relatively quick exit. A ridge of high pressure will build across the western states during Christmas weekend. That warmth will try to move eastward next week. Whether or not the cold air, reinforced by widespread snow cover, will be willing to retreat so easily is questionable. Another couple of colder shots may come in toward New Year's Day and early January, at least for the western half of the country. 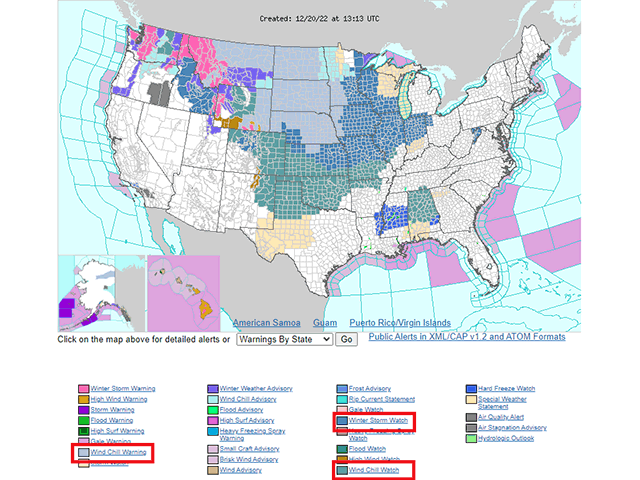