As of Nov. 23, the United States Drought Monitor shows a dismal picture of drought conditions across the Central and Southern Plains. Areas across Nebraska, Kansas, Oklahoma, and Texas are in the highest level of drought possible, D4 (Exceptional) drought.

While the Crop Progress report paints a rather disappointing picture, the forecast for the rest of this week shows the potential for some drought relief across the Southern Plains.

A low-pressure system is developing in the central Rockies and this system will dive southeast and sweep into the Southern Plains by Thanksgiving Day. Rainfall will accompany this system, developing first across the eastern half of the Southern Plains Wednesday night into Thursday morning. Through the day on Thursday, scattered showers are expected to spread throughout much of Oklahoma and northern and eastern Texas. The Texas Panhandle could also see some areas of snow and snow mixed with rain on the backside of this system Thursday night into early Saturday.

Looking beyond Thanksgiving Day, the low-pressure center will be cut off in the upper levels of the atmosphere with continued rain across much of northern Texas, Oklahoma and eastern Kansas through Saturday. DTN Ag Meteorologist John Baranick discusses the upper-level pattern more in depth here: https://www.dtnpf.com/…. Yet, given the current track of the low-pressure system, much of the Central Plains will avoid the lingering rainfall Friday into Saturday.

Given the potential duration of the system across areas of Texas and Oklahoma, the rainfall and snowfall could yield some drought relief. DTN's forecast has areas across the southern half of Oklahoma and northeast Texas seeing 2-3 inches of rainfall with this system. But for areas across central Texas, where pockets of exceptional drought linger, DTN forecasts less than 1 inch of rain, as the bulk of the rain will likely stay off to the north and east of the area. Farther north across the Central Plains, Nebraska will see little-to-no rainfall from this system, but southern and eastern areas of Kansas are forecast to receive up to an inch of rainfall, especially across southeast Kansas.

As for the snowfall potential with this system, models show more disagreement on just how far the snowfall will spread and the amount of snowfall possible. However, forecast confidence is high that snowfall will occur across the Texas Panhandle. Recent ensemble runs of the American Global Forecast System (GFS) show a pocket of 2-4 inches of snow across the Texas Panhandle with some snowfall extending into portions of far southern Kansas and western and central Oklahoma. Comparing the recent GFS ensemble runs to the European Centre for Medium-Range Weather Forecast (ECMWF), shows a much different solution for snowfall potential. Recent ensemble runs of the ECMWF show a bullseye of up to 6-10 inches of snow in the Texas Panhandle with areas of less snowfall extending into southwest Kansas and western Oklahoma.

Why is there such a difference in the snowfall potential from these two models? Some of the difference comes down to how the models depict the formation of a narrow band of relatively warm and moist air in the upper levels of the atmosphere wrapping around the north and west side of the low-pressure system. Additionally, this band of warm and moist air will be commonly associated with an area of air being pushed upward near the surface or an area of frontogenesis. Frontogenesis occurs when the change in temperature over an area sharpens. Each model has differences in how they model this system's frontogenesis, which lead to the differences in snowfall.

As this system continues to develop over the Rockies and drop southeast into the Southern Plains, models will continue to evolve and trend towards more of a consensus on snowfall amounts. Similarly, there will likely be adjustments made to the precipitation amounts as the system gets closer to the Plains.

Regardless of the future adjustments on precipitation, models continue to depict a strong signal for widespread rainfall to accompany this low-pressure system. This system certainly has the potential to lend to improvements in the topsoil moisture conditions which may also lend to improvements in winter wheat quality across areas of the Central and Southern Plains if it has yet to go dormant.

Teresa Deutchman can be reached at teresa.deutchman@dtn.com 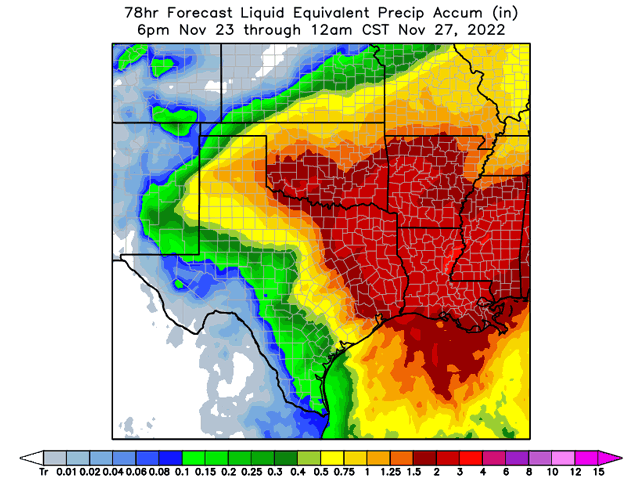