An early arctic blast is moving through the country during the next several days and will be stuck across much of North America through next week. Early stresses to livestock are compounding drought issues for feed availability.

Another such pattern is forecast to repeat in December. DTN Livestock Analyst ShayLe Stewart noted that "an early cold snap will pressure (producers') feed supplies more than originally planned, and likely drive their prices higher, too."

A strong cold front is sweeping across the Plains on Nov. 10. Temperatures behind the front are quickly dropping 40 degrees or more in some areas. Temperatures below zero in the Canadian Prairies the last couple of mornings are now being pulled southeast through the United States.

With the continent going through an upper-level pattern change, this early arctic blast will last across the country through at least next week.

Several bursts of reinforcing cold air will move through the country through Nov. 19 or 20 before we start to see some moderation across the southern half of the country. In the meantime, the forefront to the cold is producing a blizzard and heavy snow across the Northern Plains, burying feedlots in heavy snow that does not look to melt any time soon.

While the rest of the country will escape the heavy snow, they will not escape the cold, challenging record lows in some cases. Low temperatures down into the 10s Fahrenheit are likely down into portions of the Southern Plains and Tennessee Valleys at some point during the next week depending on when these bursts of cold air come through. Over the snowpack in the Northern Plains and up through the Canadian Prairies, lows below zero are going to be common through this coming weekend, and again later next week. Temperature readings will be low by mid-January standards, let alone mid-November.

Cold stress to animals will be an easy effect to point to -- this will require more feed to keep up with caloric demands. But there will be others as well, especially with regards to feed. Pastures are already starting to go dormant in a lot of areas, and the cold will only accelerate that pace, especially if they are buried in snow. But even warmer spots like the Tennessee Valley or Southeast should see colder conditions working in a bit earlier than normal, which will lower their production as well. That will put a larger burden on feed supplies for many areas of the country.

A brief, short-term hit to supplies may be withstood by some producers, but the outlook for December points to a similar situation setting up. Northern areas may not be able to break the cold, especially in Canada, but the southern states are likely to turn milder for the end of November. That is forecast to last into early December as well.

But according to DTN Long-Range Weather Risk Communicator Nathan Hamblin, several things may conspire to bring another round of cold sometime around the middle of the month. The Madden-Julian Oscillation (MJO) describes the position of clusters of thunderstorms along the equator that can affect the jet stream across North America. Hamblin noted that sometime around mid-December, models suggest that the clusters would be in a position that brings another round of cold air to the middle of the country. There is also the potential for a Sudden Stratospheric Warming (SSW) event, forecast to occur late in November. This effect is usually delayed down to the surface, but would come at similar timing to the MJO. Either one of these could mean another widespread cold shot through the U.S.

Whether or not this would be record breaking is not possible to know at this juncture, but it does point to some additional stresses as winter kicks in a little early, especially during the last couple of years.

The expansive drought over much of the country has already made hay prices very expensive. DTN Staff Reporter Russ Quinn said that this could have a dramatic impact on herd sizes during the winter and into next spring. "A tough winter is only going to push already high hay and feed prices even higher. Some extension specialists were urging livestock producers to at least have plans in place to know what they are going to do to obtain forages this growing season. Some were telling livestock producers to purchase at least some of their feeding needs now to avoid paying more come next spring, especially if it is a bad winter. Some were even suggesting cattlemen cull their herds."

The early winter will also have an unfortunate effect on wheat. DTN Ag Meteorologist Emeritus Bryce Anderson talks about that here: https://www.dtnpf.com/… 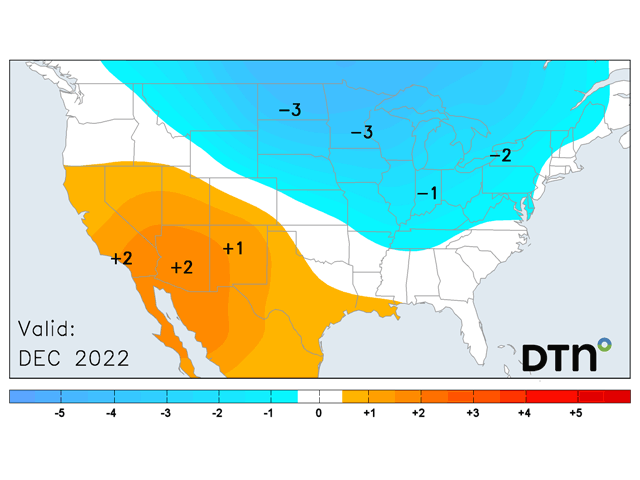