Canadian Prairies government officials are out with calls for high flood potential early this year. Saskatchewan and Manitoba are especially prone for early and extended flooding. The following is from the Manitoba government conditions report issued at the end of January:

"The January Conditions Report prepared by the Hydrologic Forecast Centre of Manitoba Infrastructure reports normal to well-above-normal runoff potential across the province. Due to the high soil moisture and high winter precipitation to the end of January, this conditions report estimates the potential for overland flooding as moderate to major in most areas of the province. This could change depending on weather conditions between now and the spring melt. The flood outlook at the end of February will further define the flood potential.

That's a lot of country; a lot of acreage. The situation is compounded by prospects for above-normal precipitation this spring. The Prairies and the northern tier of states in the U.S. appear to be in line for this feature. And as my colleague, DTN Canada Grains Analyst Cliff Jamieson said earlier this week, "The entire prairies went into the winter with wet soils and a wet spring would be disastrous."

Southeastern Saskatchewan is in similar condition to Manitoba. The province's Water Security Agency report of Feb. 9, 2017 noted that most of the province has seen a drier pattern during the winter after very heavy rain and snow last fall. However, "The snowpack in the southeast is near normal, increasing to well-above normal in the very southeast corner. Above normal runoff is expected in the lower Souris River Basin below Rafferty and Alameda Dams, including the Antler River, Gainsborough Creek, and Lightning Creek basins," said the agency's report.

It should be noted that the western two-thirds or so of the Prairies at this point have drier ground with lower flood risk. But where the wet-ground problems occur, they could be significant. Forecast precipitation the next two weeks does show no more than light to moderate totals for the Prairies. 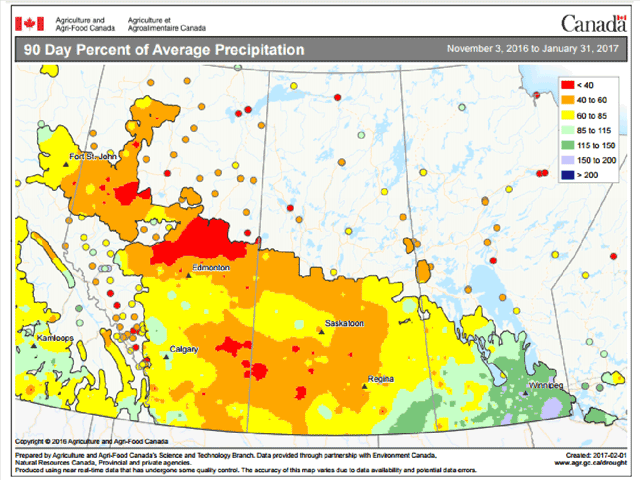