It's a common thought in business that if you throw enough money at a project, it will get done. The same principle can be applied to ending a drought -- only in the case of drought, you substitute precipitation for currency.

The Pacific Northwest is the latest example of how things can change for the better when the weather pattern turns stormier. In Washington and Oregon, most of these two states had level 3 drought -- Extreme Drought -- in effect on the weekly Drought Monitor as recently as Dec. 1.

Well, December was a very wet month. The northwestern U.S. generally took in at least double the normal amount of precipitation. The result is that at the end of December, Extreme Drought is gone from Washington, and now covers only half of Oregon. That's not solving the drought problem, but it's certainly improving the situation.

Here's how the Drought Monitor summary describes what occurred in the western U.S. during the week ending Tuesday, Dec 29 2015:

"The relentless flow of moisture has benefited the drought stricken areas of the Northwest and West Coast. In Washington the past seven days has seen precipitation 150-400% above normal. Out to 14 days, the above normal precipitation is more widespread covering the entire western half of the state.

"Further out, precipitation totals are at least 150% of normal at 30, 60, and 90 days. The temperatures are cold enough to support snow at the higher elevations. Snow water equivalents (SWE's) are ranging from near normal to greater than 200% of normal. The reservoirs in Yakima River Basin are at or above average for this time of year. The better-than-average conditions for the start of the water year allowed for a 1-category drought improvement across the entire state.

"In Oregon, abundant precipitation has relieved drought conditions across much of the state and SWE's are near-to-much above normal. Eastern Oregon remained status quo.

"For December, precipitation in northwest California was 150-300% of normal. Further south, the recent storms have dried out as they moved south into the Monterey area. It was noted that ground water and reservoir levels remain unchanged and ground water in Santa Clara Valley is not recovering.

"In Los Angeles, much like Monterey, all precipitation locations are below normal for the current water year as nearly all of the storm systems have weakened as they approach the area. Reservoirs in San Diego remained unchanged as most of the recent rains soaked into the ground. In Sacramento, recent storms have helped with local precipitation totals, and are finally beginning to generate runoff, but not enough to warrant changes in the drought status. The storms have been fairly orographic in nature. 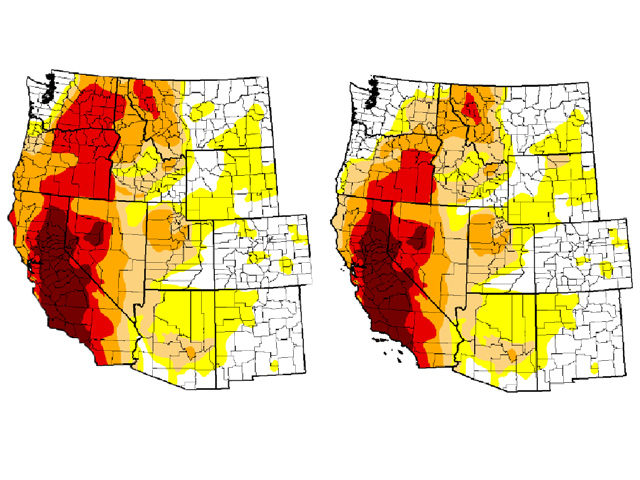