Wintry weather made itself at home across Western Canada during the past two weeks as enough of an upper level ridge developed near the British Columbia coast to block the flow of Pacific air that had moderated our temperatures during the first half of December. Despite temperatures averaging below normal for many areas during the second half of the month, December will still be an above-normal month for most of the Prairies due to the unseasonably mild first half.

Changes with the upper air jet stream flow will end the rather cold weather of recent days as some Pacific air returns to Western Canada during the next several days. The anomalously strong upper level ridge across the western Atlantic and trough through the interior U.S. West of the recent 10 days are now weakening and this will allow the ridge near the British Columbia coast to weaken and allow a flow of westerly winds to return.

The flow of Pacific air across the Canadian Rockies and onto the Prairies will bring a return of much milder weather during the coming days and probably well into next week. Very cold air will retreat back to northern and northeastern Canada for a time and bring back a temperature pattern quite typical for an El Nino.

Many of our longer range models continue to point to a milder-than-average January for the Prairies, as well as most of Canada, with El Nino conditions prevailing. The accompanying chart is today's forecast from the U.S. Climate Prediction Center. As you can see, a mild picture is being forecast for the Prairies.

If you're looking for signs that another spell of wintry weather might be in the cards, then we do see a couple of our forecast models that indicate that during the middle of January some high latitude blocking could develop. If so, this could disrupt the El Nino flow and allow arctic high pressure to develop across northwestern Canada as a polar vortex becomes displaced southward into central or eastern Canada.

If this forecast were to verify, then we might see a turn to colder or much colder weather around the second or third week of January, especially through eastern areas. Confidence remains low on this possible change and we can only monitor future forecasts. With such a strong El Nino in place, we tend to favor the patterns produced by this powerful event rather than patterns that have been nearly non-existent so far this fall and winter.

Doug Webster can be reached at doug.webster@dtn.com 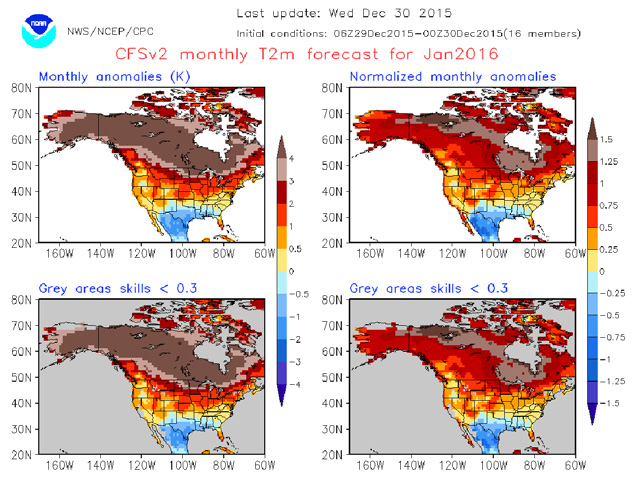