OMAHA (DTN) -- The strongest Pacific Ocean El Nino since 1997 continues to be the primary weather driver as we think about the 2016 growing season.

With that overall influence, prospects heading into the first quarter of 2016 look promising for at least trendline yields. If such a production scenario verifies, U.S. farmers will bring in a bountiful harvest for the fourth-straight season after the hot and dry year of 2012.

El Nino is the term used when equatorial-region Pacific Ocean temperatures reach a level of 0.5 degrees Celsius above normal for a sustained period of at least several months.

According to the NASA Jet Propulsion Laboratory in Pasadena, California, the current El Nino "bears a striking resemblance to one from December 1997." Both the 1997 and 2015 El Nino events featured what the JPL describes as a "thick layer of warm water" in the equatorial Pacific. An energized subtropical jet stream from this vast, warm pool has brought a series of powerful storms into the mainland U.S., including the record-breaking rainfall system in the Midwest during the weekend after Christmas.

The robust nature of the 2015 El Nino makes it likely to continue dominating the U.S. crop weather pattern at least through the first half of 2016. Michigan state climatologist Jeff Andresen is anticipating a favorable start to the spring season in the Corn Belt thanks to El Nino's influence. The framework includes a likely continuation of above-normal temperatures through the winter and into the spring. Coinciding with the mild weather, forecasts for the central region of the country also point to a drier-than-normal trend through much of the rest of the winter and into spring.

"I've already had some growers asking about the potential for switching corn hybrids to longer-season maturities," Andresen said.

The El Nino-influenced forecast also points to a reduced threat of cold-weather injury to overwintering crops in 2016. "This would be a big benefit to fruits and grapes after the last two very cold winters," Andresen said.

Long-range forecast models suggest that the Pacific Ocean could begin moving away from El Nino by the April/May/June time frame, and potentially feature a cold-weather phase -- La Nina -- by the very end of summer into the fall season.

However, South Dakota state climatologist Dennis Todey is skeptical that such a development will take place.

"Remember you need to go below minus 0.5 degree Celsius (below normal) to get to La Nina," Todey said. "By ASO (August/September/October) only four of the available models go below minus 0.5. The other 10 don't make it. At best (there is) a 33% chance (of La Nina) by ASO."

Direct correlations are hazardous. However, if the Pacific Ocean follows the 1997-98 El Nino in its evolution and pattern, it should be pointed out that U.S. corn and soybean production in 1998 was bountiful. Corn production in 1998 outpaced 1997 by a few percentage points, and the 1998 soybean crop set a record for the time.

Each year, DTN presents an outlook series on what is expected for the year ahead in various areas of agriculture. This is the first story in a series DTN is running that looks at what farmers can expect as the hot topics for 2016 in areas such as farm finance, land prices, ag and the environment, agricultural policy, crop inputs, livestock, transportation and others. We welcome your feedback on what you think the year will be like at talk@dtn.com. 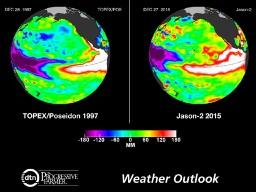 Bryce Anderson
1/6/2016 | 8:05 AM CST
The full AMS statement on climate change is at this link: https://goo.gl/tTfyAb
Bryce Anderson
1/6/2016 | 7:56 AM CST
The "climate is always changing" phrase deserves some context in view of what is happening with the atmosphere. The American Meteorological Society's opening paragraph on the topic of "climate change" summarizes the science very well. Here it is: "As a public and policy issue, climate change boils down to four overarching issues: 1) climate is changing; 2) people are causing climate to change; 3) the societal consequences of climate change are highly uncertain but include the potential for serious impacts; and 4) there are numerous policy options for climate change risk management, most of which are well characterized (i.e., have known strengths and weaknesses). These four conclusions are based on comprehensive assessment of scientific understanding and each is the result of multiple independent lines of evidence."
FRANK FULWIDER
1/5/2016 | 1:51 PM CST
It's stands to reason that warmer water means more evaporation. It has to come down somewhere. The earths climate always has been changing. The mid east once was a lush garden. It turned into a desert long before we started to make electricity out of coal. The US has greatly cleaned up our pollution, give us some credit. Our coal fired power plants scrub everything but CO2 and water out of what they emit. Our farms and forests take more CO2 out of the air than we put into it.