WASHINGTON (DTN) -- In wide-ranging comments to reporters after a Senate Agriculture Committee hearing Tuesday, Sen. John Boozman, R-Ark., the ranking member on the committee, said he is not worried about House Republicans making draconian changes to the farm bill if Republicans take charge of the House as expected.

Asked whether he fears the Republican Study Committee farm bill proposal that would remove the nutrition title from the bill, eliminate the sugar program and make other farm-program cuts, Boozman told DTN that "every time we work on a farm bill, those issues come up. I want a farm bill that will get more votes than (Sen.) Pat Roberts (R-Kan.)," a reference to the 2018 farm bill that passed the Senate 86 to 11.

See, "A House GOP Group Has a Plan to Cut Farm Programs," from July https://www.dtnpf.com/…

Biden has also nominated Margo Schlanger to be Agriculture assistant secretary for civil rights, but Boozman voted against her in committee. With this Congress coming to a close at the end of the calendar year, floor time is a precious commodity. Rural Voices USA on Tuesday released a statement urging Senate Majority Leader Chuck Schumer, D-N.Y., to bring up her nomination.

"Given her experience and career-long commitment to civil rights and public service, Professor Schlanger will be critical in ensuring that USDA programs are accessible to all and treat everyone in our rural communities fairly," the group said.

Asked about passing a cryptocurrency bill in the midst of the bankruptcy filing by FTX, Boozman said he, Stabenow and other members of the committee are still trying to figure out exactly what happened with FTX. The Senate Agriculture Committee bill would give the Commodity Futures Trading Commission clear authority to regulate digital currencies that are considered to be commodities, but it is important to provide as much consumer protection as possible, Boozman said. Some aspects of regulation of cryptocurrencies need to be worked out between the CFTC and the Securities Exchange Commission, he added.

In Tuesday's hearing, the Ag Committee heard about issues related to Rural Development and the Energy titles of the farm bill.

"The Rural Development and Energy titles of the farm bill create good-paying jobs in rural communities like my hometown of Clare in northern Michigan and improve the quality of life for rural working families," Stabenow said.

Boozman added, "Americans have been through a lot since the last time we gathered to write a farm bill. The pandemic, record-high inflation, breakdowns in the supply chain, the war in the Ukraine, floods, droughts, tornadoes, hurricanes, and wildfires have tested all of us. Rural America was not shielded from any of these challenges. In fact, in many ways, the impact in rural America was greater.

In her opening statement, USDA Undersecretary for Rural Development Xochitl Torres Small thanked Congress for providing more resources for Rural Development in the American Rescue Plan Act, Bipartisan Infrastructure Law, and Inflation Reduction Act. But she added that as valuable as Rural Development programs are, they are tied to laws going back as far as 1936 and are often dated, constrained and sometimes out of step with the needs of rural communities today.

"While Rural Development programs are often adjusted or updated around the edges, rarely are they considered holistically and with a comprehensive view of what it will take to keep wealth created in rural places in those communities and enable families to live their entire lives in the place they want to call home," Torres Small said. "The 2023 farm bill presents an opportunity to take that wider view and ensure Rural Development is the transformational partner rural and tribal communities need today."

That said, Torres Small highlighted the Rural Partners Network, which the Biden administration has established to assist to rural communities that are too small to hire the grant writers that many larger communities use to apply for Agriculture Department programs.

Nearly every member of the committee talked about the importance of easing the application process for programs such as building housing, helping hospitals and bringing high-speed Internet services to all of rural America. Several senators asked Torres Small about the definition of rural, which varies from program to program. But Torres Small noted that most of the definitions of rural for those programs are written in statute and can only be changed by Congress.

Members also asked about environmental and historic preservation reviews, which they said slow down the development of many rural projects. Torres Small said the environmental reviews are vital in order to address "environmental justice."

A series of witnesses testified about the experiences with Rural Development programs.

Near the end of the hearing, Senate Majority Whip Dick Durbin, D-Ill., who is a member of the Senate Agriculture Committee but rarely attends hearings, said that he had gotten an electricity bill for his home in Illinois with no charge because he has installed solar panels on the house. But Durbin added that a hog farmer had told him that he cannot use solar panels to provide electricity for his hog facility because his electricity co-op has said it would have to upgrade his electricity service.

Mike Casper, president and CEO of Jo-Carroll Energy (JCE), a not-for-profit electric distribution cooperative, headquartered in Elizabeth, Ill., said his co-op's electric lines were built in 1939 and that many co-op lines need to be modernized. Co-ops were set up to help farmers and other consumers and should be able to address these issues. Stabenow said a provision in the Inflation Reduction Act has "specific dollars" for the modernization of transmission lines. 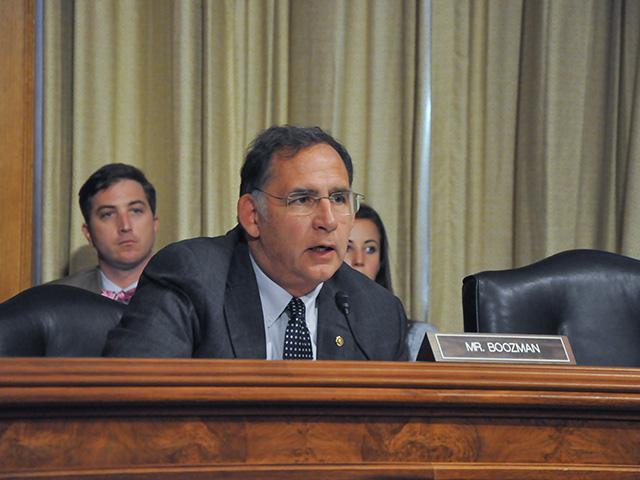