Visiting a farm in Woodward, Iowa, on Thursday, Agriculture Secretary Tom Vilsack on Thursday championed the $19.5 billion in spending on climate-smart agricultural practices in the Inflation Reduction Act (IRA) as "the largest investment in conservation since the Dust Bowl."

The secretary said the funding "is an extraordinary opportunity for us to embrace climate-smart agriculture and to invest in it with these resources."

The conservation funding, plugging into existing USDA programs, will focus on farm practices and incentives that lower greenhouse gas emissions or sequester carbon in the ground. Most these practices are already tied into EQIP, CSP and the RCPP.

Vilsack also said the climate-smart agriculture funding will not require USDA to draft any new rules before using the funds.

"The great thing about this bill is it funnels the resources through a program called EQIP, which we are very, very knowledgeable about, RCPP, the Regional Conservation Partnership Program, CSP, the Conservation Stewardship Program, and the agricultural easement program. So these are all existing programs. So it's not like we have to write a whole bunch of rules. We don't have to write a single rule."

Vilsack pointed to the backlog of conservation projects and requests from farmers that haven't been funded, but now will get that opportunity.

"So we're going to be able to hit the ground running," he said. He added, "We are very happy with these resources."

Vilsack was in Iowa with U.S. Trade Ambassador Katherine Tai. Both Vilsack and Tai were making the rounds with Rep. Cindy Axne, D-Iowa, who is a member of the House Agriculture Committee, but also the lone Democrat in Iowa's congressional delegation. Also see, "Vilsack, USTR's Tai Hear About Ag Trade," https://www.dtnpf.com/…

With Axne facing reelection there were obvious plugs seeking to support her campaign. Vilsack touted Axne's votes for the American Rescue Plan, the infrastructure bill, the semi-conductor bill and the new Inflation Reduction Act with its investments in climate change and health care. Axne also has already starting running commercials touting provisions of the IRA.

Looking to highlight these pieces of legislation, Vilsack has been visiting states to plug how the spending on infrastructure, renewable energy and conservation helps farmers long-term. He especially spotlighted investments in transportation, locks and dams and ports to boost trade to maintain a competitive edge.

"For me, this is the most exciting and transformational time in American agriculture in my lifetime," Vilsack said.

The secretary pushed back on GOP criticisms of the IRA, especially the idea that it could negatively impact negotiations on the next farm bill.

"First of all, how can you be against a record level of investment in conservation, lower healthcare costs for seniors in rural areas with drug costs and insulin and lower energy costs for American families?" Vilsack said.

Sen. Debbie Stabenow, D-Mich., chairwoman of the Senate Agriculture Committee, has said the funding in the IRA will create greater flexibility in writing the new farm bill, Vilsack said. "So to the contrary, it's not restricting the farm bill. It's really more supportive of opening up opportunities for additional resources and investments in the farm bill."

Axne added the USDA funding in the IRA legislation "absolutely does not impact the decision-making that we have on the farm bill." Axne then criticized GOP proposals in Congress to reduce crop insurance.

USDA was already moving ahead with a $1 billion pilot program called the Partnership for Climate Smart Commodities using Commodity Credit Corp. funds. The trick there was USDA had to tie the climate investments in ways that boost the sale of a commodity, a requirement for tapping CCC funds. Vilsack noted the demand for the program and its two funding streams generated 1,050 funding applications. That pilot funding should be announced in September.

The secretary also pointed to the announcement earlier this week by USDA on nutrient management. He said roughly 28% of crop acres are "over-nourished" and developing more nutrient management plans on those farms would save farmers $30 an acre in costs by being more precise with inputs. "Less inputs used, that saves money."

Farm-state Republicans have had a different take on the USDA money in the IRA, a bill none of them voted for over the past month. Rep. Glenn Thompson, R-Pa., ranking member of the House Agriculture Committee, said the IRA "only complicates the pathway to a Farm Bill and creates even greater uncertainty for farmers, ranchers, and rural communities."

Thompson will get a chance to further make his case to farmers later this month at the Farm Progress Show where he will host a farm bill forum with Rep. Randy Feenstra, R-Iowa, who also serves on the Ag Committee. 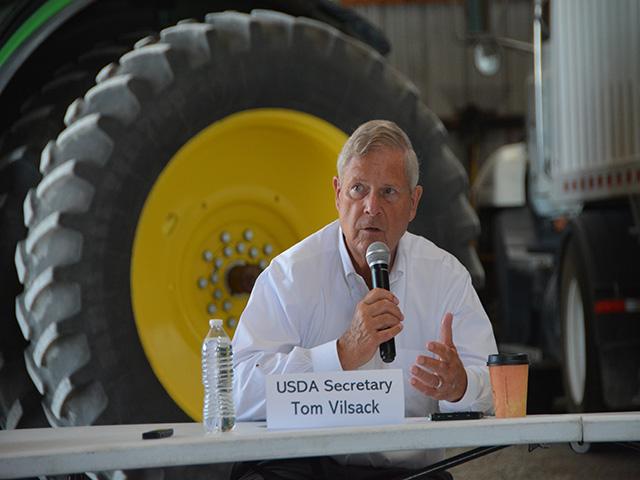