WASHINGTON, (DTN) -- Zach Ducheneaux, administrator of the Agriculture Department's Farm Service Agency, credited the White House request to Congress last week for $500 million in additional farm subsidies as a sign the Biden-Harris administration wants to help the farmers even if prices go down.

"I think it demonstrates the administration's commitment to our ag producers" and the willingness "to leverage the commodity prices for a little longer term," Ducheneaux said in an interview with DTN Political Correspondent Jerry Hagstrom, adding that no one knows how long prices will stay at current levels.

The aid package would spend $500 million to increase U.S. production of key crops to help make up for the shortfall in global food production directly tied to the impacts of the war in Ukraine. About $400 million would go to boosting loan rates for 2022 and 2023, and another $100 million would be tied to a crop insurance incentive to increase double-cropping wheat.

Ducheneaux noted that there is no guarantee crop prices will stay high. This year, high crop prices caused by the war in Ukraine have focused more attention on putting land into production rather than into the Conservation Reserve Program (CRP).

Ducheneaux also noted that, as commodity prices are increasing, the cost of that production is also increasing. "It is not always a strictly inflationary result. In some cases, it is profiteering on the backs of producers that keeps them from doing what they want to do," he said.

Producers will not be able to make their full contribution to mitigating climate change, he said, until they are earning enough from their products to afford to take other actions. At present, they are so dependent on the cycle of commodity prices, he said, that "the incentive-based programs are the only opportunity they have to meaningfully engage.

"I think there is a misconception out there in the broader American society that producers are not interested in soil health or climate mitigation strategies," Ducheneaux said. If they had the resources to engage they would do it because they know the practices would be beneficial in the long run, he said.

Ducheneaux added that he still hopes CRP will grow to 27 million acres by 2023, the maximum allowed by Congress under the 2018 farm bill, even though the current statistics on that program make that goal look difficult.

The issue is important because the Biden administration has said that land in the CRP sequesters carbon, helping American agriculture contribute to efforts to mitigate climate change.

Agriculture Secretary Tom Vilsack announced Tuesday that USDA has accepted two million acres into the CRP program, but he also noted that producers submitted re-enrollment offers for just over half of the 3.4 million acres expiring this year and offered only 400,000 acres of new land, compared with 700,000 new acres last year.

But USDA is encouraging landowners to still sign up for the working-lands Grassland Conservation Reserve Program, the more targeted buffer-type practices under Continuous CRP, and partnership opportunities through the Conservation Reserve Enhancement Program (CREP). Ducheneaux said he believes the signups for those programs will make it possible for FSA, which manages the CRP, to reach the maximum acreage enrollment. The "success" USDA is having in attracting land into the grassland program, particularly some reservation-wide programs in the West, will help with enrollment, he said.

Although the CRP is often described as a program under which farmers get paid to idle land that has been in crop production in order to achieve conservation and wildlife benefits, Ducheneaux said, "I don't see CRP as land idling."

Noting that USDA can allow CRP land to be harvested for hay in the midst of drought emergencies, Ducheneaux pointed out that USDA allowed harvesting and foraging on CRP land last year and said it "literally kept cattle herds together" in North and South Dakota and Nebraska. In normal years, the CRP should be viewed as a program that keeps land in "reserve." The CRP also "finds a better use for land that is marginal or submarginal" and creates biodiversity, he said.

CRP "is an entirely voluntary program," Ducheneaux noted, and landowners can make a decision about enrollment depending on what the market tells them to do.

Asked if he had anything to add, Ducheneaux said that he wanted his email and telephone number included in the article: email zach.ducheneaux@usda.gov; call 202-941-4675. 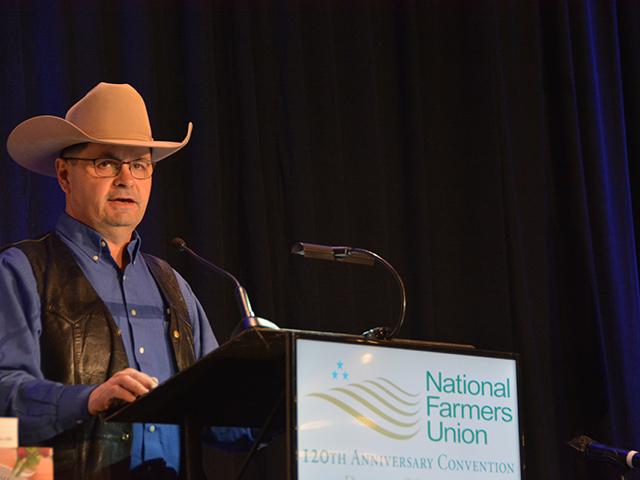