OMAHA (DTN) -- The U.S. Department of Agriculture is mum right now on Agriculture Secretary Tom Vilsack's view about $500 million in an aid package for Ukraine meant to spur more production of wheat and oilseeds.

Typically, when the White House announces a major priority such as a $33 billion international aid package, Cabinet secretaries issue statements and fact sheets about their role in the administration's agenda, often with a bit of praise for the president added for good measure. USDA's news release pages are filled with details on "Biden administration" announcements or "Biden-Harris" initiatives, or executive orders.

Since the White House first rolled out its proposal to boost marketing loan rates for certain crops on April 28, USDA's key leaders, including Vilsack, have remained silent. USDA press secretaries also did not respond to questions from DTN about the aid package.

The aid package would spend $500 million to increase U.S. production of key crops to help make up for the shortfall in global food production directly tied to the impacts of the war in Ukraine. About $400 million would go to boosting loan rates for 2022 and 2023, and another $100 million would be tied to a crop insurance incentive to increase double-cropping wheat.

The entire $33 billion aid package was sent to Congress by the White House on April 28. Along with military and other humanitarian aid, the White House highlighted the need to address food security, especially commodities affected by Russia's invasion of Ukraine. The package would "build countries' resilience to global food supply and price shocks," as well as "support the production of United States food crops that are experiencing a global shortage due to the war in Ukraine." The plan specifically pointed to "wheat and soybeans helping to address rising food prices here at home and around the world."

The administration's proposal would raise loan rates two years for wheat, oilseeds and rice between 17% and 38%, depending on the crop. The biggest bump would come from wheats, increasing the loan rate from $3.38 a bushel nationally to $5.52 a bushel. Reflecting the impact of potentially losing Ukrainian sunflower oil exports, the plan would increase the loan rate for sunflower seed, rapeseed, canola, safflower, flaxseed, sesame seed and other oilseeds from $10.09 per cwt to $14.13 per cwt.

On the crop insurance side, the $100 million "Double Cropping for Democracy" proposal would provide additional premium subsidies in 2023 for each acre in which farmers plant and insure soybeans, followed by another insured crop -- ideally winter wheat. The premium subsidy would equate to $10 an acre, meaning USDA would be looking to get 10 million acres double-cropped after soybeans in 2023.

REACTION IS LOW KEY AND MIXED

The National Association of Wheat Growers issued a statement saying the group "appreciates the administration's creative efforts to ensure a stable food supply for the American people and the world." NAWG added that as the proposal "is refined though the congressional process," the group will work with Congress to help provide incentive payments through crop insurance to increase wheat production through double cropping.

"We would like to see wheat production encouraged throughout the nation and incentivize both spring and winter wheat growers," said NAWG CEO Chandler Goule. "It is important that we take a holistic approach to ensure that we have an adequate supply of food crops to meet the emerging humanitarian needs. U.S. wheat farmers produce the best, highest-quality wheat and should be supported during this time of global food insecurity."

Responding to questions from DTN, Goule said there are questions at NAWG about just how big the geographical area is where winter wheat can be double-cropped behind soybeans.

A spokeswoman for the American Soybean Association responded to DTN, "ASA is awaiting further details from USDA, at which time we can more fully comment on what the proposal could mean for soy. Meantime, we are appreciative that the administration has considered agriculture in the proposal and look forward to working with Congress on next steps."

On the outside looking in, former USDA Chief Economist Joe Glauber, now a senior research fellow at the International Food Policy Research Institute, has been paying close attention to the agricultural and food security issues stemming from the Russian invasion of Ukraine. Still, Glauber told DTN he doesn't understand the logic of raising loan rates, noting the current high prices for commodities already provide incentives for farmers to plant.

"I get the urgency to try to do something," Glauber said, but described the move on loan rates as "baffling."

Glauber added, "You actually raise a couple of those loan rates above reference prices" under Price Loss Coverage, Glauber said. "Again, it just doesn't make any sense. Right now, prices are, of course, well above those levels. Farmers already have a lot of incentives to plant. No question about that. Raising a loan rate doesn't really help that."

Also, if prices do come tumbling down, those higher loan rates would open the federal government to a lot of financial exposure through the Marketing Assistance Loan (MAL) program, Glauber noted.

Regardless of a government loan incentive, Glauber said winter wheat acres next fall would likely see a bump in acreage if prices remain high.

"Come fall, particularly in the Southern Plains, if prices are really high for wheat, there is going to be an incentive to plant wheat," Glauber said. "And the same thing with double cropping. The last time we had a big double-crop area was 2013. Same thing -- we had really high prices. So, I suspect some people will want to look at potentially double-cropping soybeans."

House Speaker Nancy Pelosi, D-Calif., was in Ukraine during the week, making an unannounced visit with a handful of Democratic congressmen to meet Ukrainian President Volodymyr Zelenskyy. Rep. Michael McCaul, R-Texas, ranking member of the House Foreign Affairs Committee, has backed the aid package and called on Congress to quickly pass it. McCaul said May 1 on "ABC's This Week" that he expects the House will back the package.

"Time is of the essence. The next two to three weeks are going to be very pivotal and very decisive in this war, and I don't think we have a lot of time to waste."

Sen. Tim Kaine, D-Va., said on CBS's "Face the Nation" that the U.S. Senate would take up the aid package as early as this week. "I think we need to push it very, very quickly."

Biden's aid package includes $1.6 billion in global food aid, most of which will run through the U.S. Agency for International Development (USAID) rather than USDA. The package would include about another $120 million for USDA's Food for Progress, directed toward Africa and the Middle East, and another $20 million for the Bill Emerson Humanitarian Trust. USDA and USAID just last week announced tapping $672 million for foreign food aid.

"Fertilizer shortages are real now because Russia is a big exporter of fertilizer," Power said. "And even though fertilizer is not sanctioned, less fertilizer is coming out of Russia. As a result, we're working with countries to think about natural solutions, things like manure and compost. And this may hasten decisions that would have been in the interests of farmers to make anyway. So never let a crisis go to waste, but we really do need this financial support from Congress to meet the emergency food needs so we don't see the cascading deadly effects of Russia's war extended into Africa and beyond." 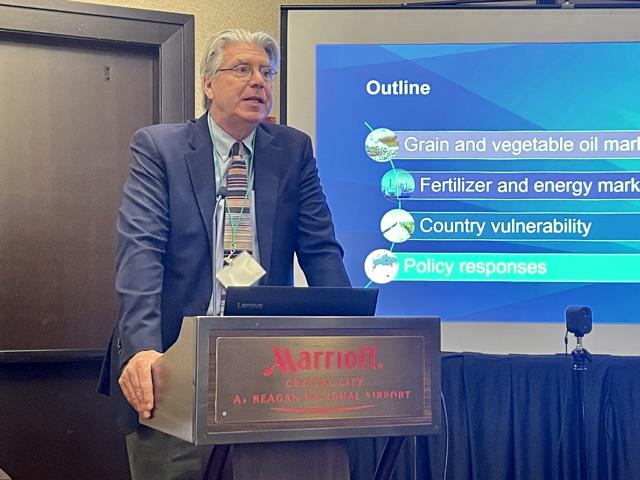