OMAHA (DTN) -- President Joe Biden will speak Tuesday at a POET ethanol plant in western Iowa in his first trip to the state since he was elected in 2020.

Biden will travel to Des Moines, then to Menlo, Iowa, a small town about 45 minutes west of Des Moines with a POET Bioprocessing plant that has capacity for 150 million gallons of ethanol.

The White House announced the president will use the event to "discuss his administration's actions to lower costs for working families, reduce the impact of Putin's price hike, and Build a Better America with Bipartisan Infrastructure Law investments in rural communities."

Biden's trip to Iowa, and particularly to an ethanol plant, comes as biofuel groups have been amplifying their message for the Biden administration to allow continued year-round sales of E15. The Renewable Fuels Association on Monday stated for "swift action by the Biden administration would ensure consumers continue to have access to E15 throughout the summer." RFA announced it was launching advertisements in 19 states to seek immediate action on E15.

In a statement Monday, Geoff Cooper, president and CEO of RFA, again stressed the need for the Biden administration to quickly approve year-round E15. He also said the group wants to hear more about the Renewable Fuels Standard blend volume requirements and EPA's goals for the RFS for 2023 and beyond.

"We are very excited for President Biden's return to Iowa and look forward to hearing more about the administration's vision for the future of low-carbon renewable fuels like ethanol," Cooper said. "As American families are facing record high gas prices, it is our hope that President Biden uses this opportunity to outline a strategy for quickly expanding the use of lower-cost ethanol blends like E15. Currently, E15 is the lowest-priced fuel available anywhere in the marketplace, but consumers are at risk of losing access to E15 on June 1 due to the outcome of an oil industry lawsuit. During his trip, we are hopeful that President Biden will unveil a plan of action for ensuring American consumers continue to have access to low-cost E15 this summer."

Former President Donald Trump spoke at an Iowa ethanol plant in June 2019 to announce that his administration would lift the year-round ban on E15. That EPA rule was later overturned in a federal court decision.

Biden lost Iowa to Trump by 138,611 votes in 2020 with rural Iowans heavily favoring Trump over Biden.

While Agriculture Secretary Tom Vilsack is Iowa's former governor, the Agriculture secretary is unlikely to attend Tuesday's event. USDA on Saturday announced Vilsack had tested positive for COVID-19. Vilsack is isolating and will return to the office once he has tested negative for the virus. 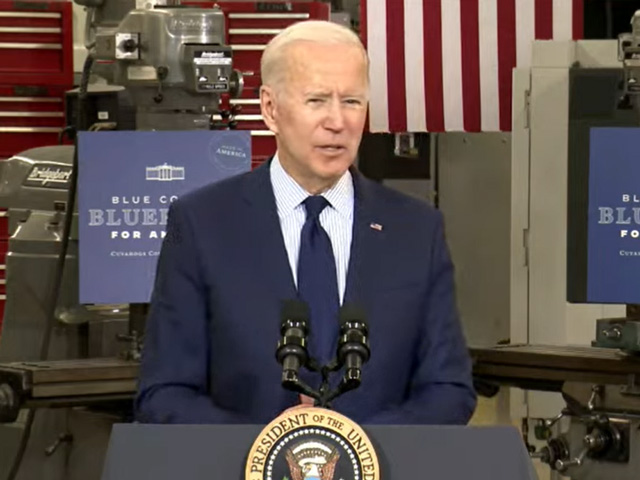