While the political wrangling continues over the size and scale of the Building Back Better Act, Agriculture Secretary Tom Vilsack is confident there will a sizable increase for USDA conservation programs.

As of late September, the agriculture section for the budget reconciliation bill was expected to have $28 billion over ten years -- a boost of about $2.8 billion a year -- that would go towards "climate-smart" conservation practices. That includes a program that would pay potentially $25 an acre for farmers to grow cover crops.

Speaking to reporters on Wednesday during an event with Mexican Agriculture Minister Victor Villalobos, Vilsack said he still expects to see a significant increase for agriculture despite plans to cut the bill from $3.5 trillion to around $1.9 trillion.

"It's a significant amount of conservation resources," he said. "Now, these numbers are changing as we speak as they try to work through things. But I'm confident that we're going to see a significant investment in conservation. "

Vilsack and Villalobos visited the farm of Craig and LeVon Griffieon just outside of Ankeny, Iowa. The Griffieons talked about the importance of the soil on their farm, pointing to some of the sprawl that surrounds them as more house developments have been built around Ankeny, a large suburb of Des Moines.

"We need to put a monetary value on clean air and clean water, and healthy soil," LaVon Griffieon said. "And we need to preserve that soil, but our system isn't designed to do that."

USDA right now is in the process of training thousands of staffers at the Natural Resources Conservation Service about soil health practices meant to protect the top soil. USDA is focusing more resources on climate-smart conservation practices, which includes some large-scale demonstration projects on carbon sequestration.

"There is a lot of learning and a lot of mind-changing that has to take place," Vilsack said.

The goal, the secretary said, is to create new revenue streams as farmers are able to potentially sell carbon credits, and possibly gain premiums in the marketplace for growing crops using the best practices.

LeVon Griffieon said conservation practices on the farm implemented 20 years are still helping sustain the farm. She said policy has a role to play there.

"The government has a great way to push in a direction. You have go the ability to show us here is a way to go."

Responding to a letter from senators about $700 million in aid to biofuel producers, Vilsack said USDA is still working out the details of the program. He defended the time it is taking for USDA to release funds or begin enrollment for biofuel produces, said "new programs that require some thought" in terms of just how much can be adequately provided and who is eligible.

"You just don't write the checks and send them out. You have to figure out who gets it, how you send it out, and when you send it out," Vilsack said. "Are there limits? So all of that has to be worked out. So we've been working through that. So I expect you to anticipate by the end of the month

USDA under the Biden administration has found itself providing delayed aid to industries and producers that weren't at the front of the lines or accounted for under the initial COVID-19 aid plans under the Trump administration. Vilsack said USDA has provided aid to 25 different types of producers or industries that were not eligible for aid last year, or before the American Rescue Plan was passed last March. He also indicated USDA has fewer staff to get the job done.

"It has not been an easy task. It is with a department that probably has 3,000 to 4,000 fewer people than it did the last time I was secretary."

The secretary added has only two confirmed undersecretaries while several others are waiting for action in the Senate. He criticized Republican moves to delay votes on confirmed positions such as Undersecretaries.

"While I'm doing my job to get that biofuel money out, it would be great if they can do their job and get me my undersecretaries," he said.

The Renewable Fuels Standards obligated blend volume rules remain at the White House Office of Management and Budget. Vilsack said he did not know when EPA would release the final numbers, but the secretary said the Biden administration will not be granted a lot of small refinery exemptions that will water down the blend requirements.

"Under the previous administration, you would get numbers but you could never count and never, you can never trust those numbers," he said. "The reason you couldn't trust them is because there'd be waivers that were granted repeatedly and, and extensively. So that number was constantly fluctuating. EPA Administrator (Michael) Regan has come out very clearly and said, this administration is not going to be granting waivers in the way or the rate the previous administration. So when the numbers come out, that's the good thing about these numbers is that they'll be solid, and their numbers of the industry can count." 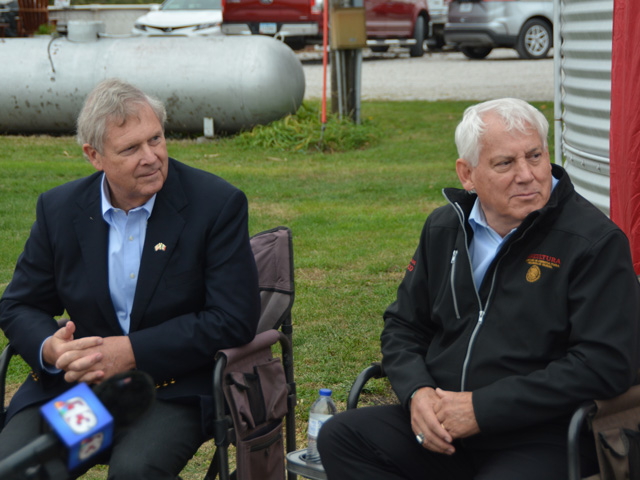