With President Joe Biden apparently set to announce a framework for a deal on his social programs, the House of Representatives may eventually move ahead on the infrastructure bill as well.

Biden was expected to lay out his latest framework on Thursday, and then speak directly with House Democrats, before the president begins an international trip. Biden is scheduled to meet in Rome with Pope Francis on Friday, attend the G20 meeting in Rome over the weekend and then attend the United Nations Climate Change Conference known as COP26 in Glasgow, Scotland.

The agricultural funding included $28 billion proposed for conservation programs meant to encourage farmers to adopt climate-smart practices. Under the details, the bill would spend $5 billion for a cover crop program that would operate through the Farm Service Agency. Another $9 billion will boost spending for the Environmental Quality Incentives Program (EQIP) and $4 billion for the Conservation Stewardship Program. Another $7.5 billion will got to the Regional Conservation Partnership Program (RCPP); $1.5 billion for the Agricultural Conservation Easement Program (ACEP); $600 million for USDA to quantify greenhouse-gas reductions; and $50 million for USDA's climate hubs.

Within those funds for EQIP and CSP, the plan called for a program that would pay farmers up to $25 an acre to plant cover crops.

In her column, Stabenow highlighted the acceleration of billion-dollar weather and climate disasters. She also cited the need to accelerate emission reductions, and the need to take steps to remove carbon from the air.

"One key solution, too often overlooked, is already here -- in the land under our feet and the trees that surround us. Farmers, ranchers and foresters are uniquely positioned to address the crisis head-on through climate-smart stewardship," Stabenow stated.

Stabenow pointed to the value of regenerative and climate-smart practices, including cover crops and managed grazing practices. Research also can help farmers and ranchers reduce "super pollutants" such as nitrous oxide and methane.

Stabenow then pointed to research such as ranchers feeding seaweed to cattle, which can reduce methane emissions by up to 80%. "Many of these breakthroughs are the result of public-private research partnerships, which we must do more of to accelerate their adoption and impact on the climate crisis."

The senator pointed to the damage -- "the federal government has spent an average of $126 billion a year over the past five years alone to respond to the damage caused by a changing climate." She cited that is threatening to exceed funding in the budget to tackle pollution.

"The climate crisis is the defining challenge of our time. Given the right support, our land and trees can be a meaningful part of our response, alongside aggressive emissions reductions in other sectors like energy and transportation.

"We need to act now with the sense of urgency that this moment requires."

"In reconciliation, climate-smart agriculture and forestry is the way forward" 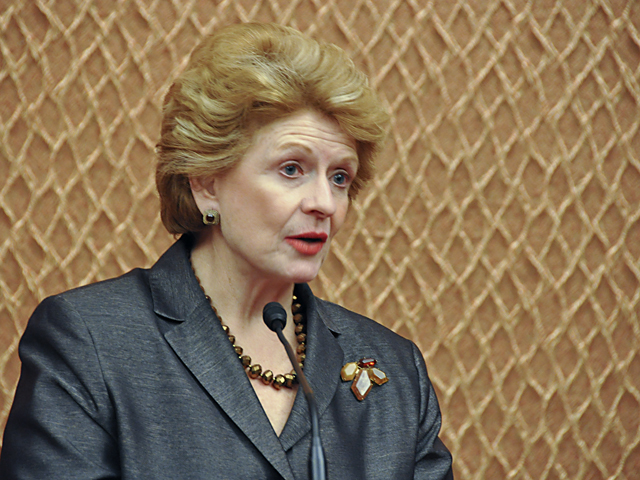