It's no surprise Grassley, one of the ethanol industry's most ardent defenders in Congress, would encourage Trump and his administration not to appeal the court ruling, which was a major victory for the ethanol industry against petroleum's push to reduce the mandates of the Renewable Fuels Standard.

As DTN's Todd Neeley reported last Friday, the White House was preparing to appeal the ruling. But the administration filed for a two-week extension in its response to the ruling.

The 10th Circuit, based in Denver, covers the states of Colorado, Utah, New Mexico, Kansas, Oklahoma and Wyoming. Besides determining if the ruling should stand, EPA also has to decide whether the ruling only applies to the 10th Circuit, or should be applied nationally as well.

After hearing last week the administration could appeal the 10th Circuit decision, Grassley said he reached out to several "high-level" officials. He made the point that farmers and others in ethanol industry remain skeptical over whether the administration is really serious when it comes to the Renewable Fuels Standard and the promised 15 billion gallons of blend volume.

Grassley also said fellow Iowa Sen. Joni Ernst also called President Trump "urging him to not let his EPA appeal. By not appealing, he would simply be following the law and the president would reduce the skepticism that people have about Wheeler going along with what the court case said, and what we agreed to back in September."

Ernst's call helped, Grassley noted, as the administration chose to ask the courts for a two-week delay over whether to file an appeal or accept the court ruling. Still, Grassley defends the 10th Circuit ruling and said it should stand.

"The court has made it clear they have given too many waivers and some they should not have never given and so that reduces that skepticism about how Washington plays politics all the time," Grassley said.

Grassley also pointed out there are about 14 states "that have great corn-growing potential and do it," the senator said he hopes ideally at least 20 other senators will step up to help Grassley and Ernst in this fight.

An appeal, though, would allow EPA to delay its final rule on small-refinery exemptions, but would create uncertainty for corn producers, ethanol producers and small refineries. "It would be a lose-lose situation," Grassley said. "So we want the president to have a win-win situation that comes by not having an appeal."

Even major oil lobbies "are sick and tired of the uncertainty" that would come from an appeal, Grassley said. Yet, pressure continues from oil-state senators, largely Texas Sen. Ted Cruz, Grassley said.

If the administration appeals, it's also a question of whether EPA would appeal for an "en banc" ruling from the 10th Circuit, which only has a possible 1% chance of being taken up. The odds of the U.S. Supreme Court taking up the appeal are even slimmer, just given the sheer volume of cases sent to the court and how many the justices hear annually.

As chairman of the Senate Finance Committee, Grassley also is a key player in how Congress will respond to any economic stimulus regarding the coronavirus. President Trump and his administration have pitched the idea of cutting payroll taxes -- which ioften means a cut in the amount of taxes paid for Social Security and possibly Medicare. Combined, those taxes equal 7.65% of gross pay for most wage earners. In the past lawmakers have also made the same withholding cuts to self-employed taxes as well.

The last time Congress cut payroll taxes was in late 2010 in another response to the slow recovery from the 2009-10 recession. In that situation, Congress cut the Social Security withholdings for wage earners for 2011 from 6.2% to 4.2%. For self-employed people, the tax cut lowered their payroll taxes from 12.4% to 10.4%.

Grassley said he would be sitting down with other senators and the GOP caucus would hear later Tuesday from Trump administration officials about what they would like to see done. Grassley said the overall economy cannot be measured simply by volatility in the stock market, but if the COVID-19 virus "is going to be catastrophic," then Congress needs to be ready to act quickly.

Grassley did not want to say if he specifically supports the idea of a payroll tax cut as chairman of the committee and "being an honest negotiator." He did note twice since he has been in Congress lawmakers have cut the payroll taxes. 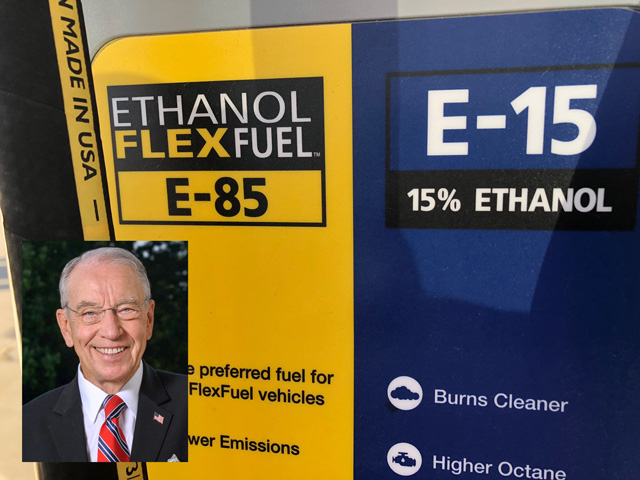 Clark Reimer
3/12/2020 | 9:14 PM CDT
The sooner Trump and his BIG OIL EPA ADMINISTRATORS are voted out of office the better. Then and only then will all this uncertainty surrounding the Renewable Fuels Standard and the endless waivers that have been handed out over the last three years will that uncertainty come to an end.