Peterson voted against both articles of impeachment, as did Rep. Jeff Van Drew of New Jersey. Van Drew is leaving the Democratic Party over impeachment. Rep. Justin Amash of Michigan left the Republican Party to become independent and he supported impeachment.

"The Republican Party has never been so affronted but they have never been so united as they are right now," Trump said. He added, "The Democrats always stick together. Think of it: 3 Democrats went over to our side," he said. "That's unheard of."

After a day of division and outrage, House members are expected to pivot Thursday to vote on the U.S. Mexico Canada Agreement, a trade deal that has strong support in rural America and will likely draw a large bi-partisan majority.

Peterson, who has served in Congress since 1991, issued a statement noting that throughout his career he has worked from the belief that Congress can only address the country's most pressing challenges through bipartisan action. Initially, Peterson said lawmakers were told that impeachment would only move ahead with bipartisan support.

"After the Russia investigation, Mueller Report and official impeachment investigation by the House Intelligence and the House Judiciary Committees we became more polarized and had less consensus," Peterson said. "How can it be that after all the testimony, every Democrat thinks the president has committed an impeachable offense and every Republican thinks he has not?"

Peterson added, "I’m not a lawyer and am not sure what “high crimes and misdemeanors” are, but I do know that this process has not convinced the people in my district we have impeachable offenses and that the president needs to be removed. I disagreed with how the Russia probe and Mueller report were handled and think it set the stage for the failed impeachment inquiry. The inquiry and hearing have been partisan and have failed in convincing the country while further placating some people who have wanted the president impeached since he was elected.

Peterson concluded, "This process has been a mistake and I will not be whipped in line by my party. I may stand alone but I stand in good conscience. History will show this to be a mistake and the Senate will make short work of an acquittal."

Peterson did not speak on the House floor during the daylong debate Wednesday.

“Unfortunately, Many of my colleagues have diminished what should be a solemn and grave proceeding into an absolute political circus simply because they do not like the man occupying the White House," Conaway said. "Many Democrats have been intent on impeaching the president since the day he took office. Their actions are clearly motivated by their hatred of President Trump."

Conaway added that actions taken by the House Intelligence Committee were unnecessarily held behind closed doors though nothing classified was shared. That blocked Americans from hearing the facts for themselves, Conaway said. Further, no real evidence were ever presented against the president, he said. "If there were criminal activity, as many of my Democratic colleagues have claimed, then why are there no claims made in the articles of impeachment?" Conaway said.

The back and forth of claims went on all day long. Lawmakers frequently invoked founding fathers such as Alexander Hamilton, as well as Presidents George Washington and James Madison. "Alexander Hamilton and others seemed to predict the rise of Donald Trump with staggering prescience," said Rep. Adam Schiff, D-Calif., chairman of the House Intelligence Committee, who led much of the debate for Democrats.

Rep. Ted Yoho, R-Fla., said President George Washington warned the country that political parties could overturn the will of the people "cunning ambitious and unprincipled men and women will be enabled to subvert the power of the people to usurp for themselves the rein of government."

Rep. Sean Patrick Maloney, D-N.Y., said the facts establish that the president abused the power of his office for personal gain. "These action are necessary as they are heartbreaking," said Maloney, who serves on the Ag Committee. "It is the president, not any member of Congress, who has brought us to this sad place. His actions echo in this chamber like a tin can tied to his leg will rattle behind him through the pages of history,"

Rep. Bob Costa, D-Calif., a long-time Ag Committee member, said the two most difficult votes are war and impeachment. He cited the president's comments that there was a quid pro quo, and calls in public by the president for Ukraine and China to investigate former Vice President Joe Biden.

"There are disturbing facts from this administration that inform my decision, including the president's own words," Costa said.

Rep. Don Bacon, R-Neb., a retired Air Force brigadier general, said no law was broken and aid to Ukraine was delivered before the end of the fiscal year. There is no quid pro quo and no crime. He and others said impeachment is being done just to ensure Trump is not elected in 2020.

"Today's vote sets a new precedent today for America. In the future the majority will use impeachment as a tactic to remove a president based solely on partisanship," Bacon said, reiterating a position taken by several Republicans throughout the day.

First-term Rep. Dusty Johnson, R-S.D., another Ag Committee member, could be seen most of the day sitting behind Republican speakers in the House gallery, also spoke late in the debate. "Impeachment is not in the best interest of this country," Johnson said. "In fact it has only deepened the partisan divide that has truly plagued this country. When the sun comes up tomorrow, I pray with all heart that the anger and the division in this chamber will give way to an honorableness, and a productivity and a time of working together." 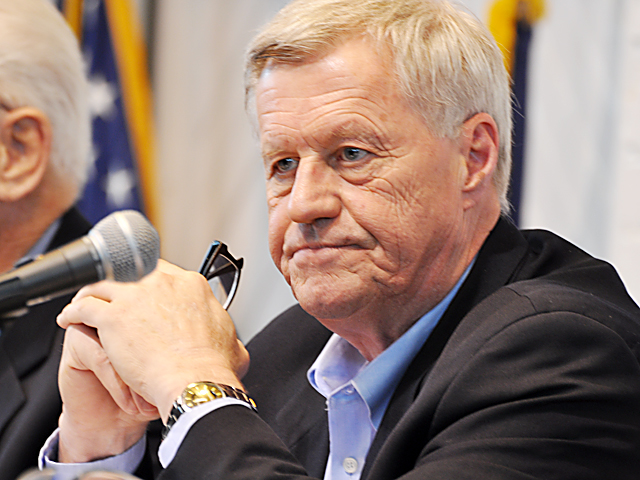