Deputy Agriculture Secretary Steve Censky said Thursday farmers and ranchers will need a combination of technology and soil health practices to increase the "sustainable intensification" of food production to both feed a growing population and face a changing climate.

During his speech at the Sustainable Agriculture Summit in Indianapolis, Censky focused on the work USDA does on sustainability and climate change. USDA takes a leading role in developing practices and technology that increase crop and livestock production while reducing the environmental impacts, he said.

The future of agriculture lies with scientific advancements, Censky said, because of population growth with the planet projected to have 9.7 billion people by 2050. "The demand for the goods and the services that will need to be provided by our farms and forest lands will need to grow by 40%," Censky said. "At the same time, we are being asked to reduce agriculture's environmental footprint and impact."

To meet the challenge, Censky said, "Our farmers, along with our livestock producers and others in the value chain, will need to practice sustainable intensification -- increasing yields, increasing production while at the same time without increasing land use and other factors of production use."

Farmers also deserve credit for the progress being made in some of these areas, including credit through ecosystem service markets, Censky said. Speaking to reporters afterward, Censky said USDA has been working on ecosystem markets for some time, working to ensure the metrics are there to measure the effects of practices as private-sector markets develop.

Agriculture will have to embrace agricultural technology to ensure food security in the U.S. and globally. Censky highlighted USDA is focusing on investments in plant breeding techniques and gene-editing techniques "that will significantly reduce the time it takes to bring new crop varieties to market and improve the productivity of animal agriculture."

Talking about soil health, Censky noted he judged soils when he was an FFA member. "Soils have become sexy again. It's become cool to work on soil health and that is really exciting," he said.

The soil itself and microbiomes "really holds one of the great potential advancements for American agriculture and sustainability."

Research now is just touching on the tip of the iceberg when it comes to looking at the interactions between soils, microorganisms and plants, he said, "and really going to be a driver as we look to the future of American agriculture."

Censky said he was just recently in the Palouse region of Washington State and Idaho looking at conservation practices that improve soil health. He highlighted some long-term studies in the area on cover crops and more diverse crop rotations can improve soil structure and build resistance to erosion.

Censky tied in the work of the Agriculture Research Service (ARS), competitive and formula grants by the National Institute for Food and Agriculture (NIFA) to the role USDA plays in conservation with NRCS, the Forest Service and other agencies.

Pointing to the threat of pests to crops, Censky cited an ambitious plan by USDA to sequence the genome of more than 5,000 insects and mites. As of now, ARS scientists have sequenced the genomes of 25 insects. The work will develop "more environmentally benign technologies" to target pests and reduce crop damage.

USDA also is looking at ways microbiomes can remove pollutants from wastewater, such as microorganisms removing nitrogen from water. The technology is used not only by the swine industry, but also has been used by NASA to recycle wastewater in space, he said.

Censky also pointed to precision agriculture as an increasingly important tool for agriculture to intensify production moving forward. This isn't just an area for crops, but also includes ways to monitor water and feed intake for livestock as well. To bring the benefits of precision agriculture, Censky said, USDA must also continue to promote and expand rural broadband as well. USDA has just released over the past several months a wave of grants and loans amounting to roughly $600 million. A similar series of funding will kick off in January as well, he said. "Closing that digital divide is one of our priorities," Censky said.

Right now, the rule for CRP signup and changes in the program are under review at the White House Office of Management and Budget. USDA expects OMB to release the rule soon, though Censky said he doesn't want to say when that could happen.

"We think it's going to be one of the biggest CRP signups we've had for a lot of years," Censky said.

USDA also is expected to reduce CRP rental rates during the enrollment. Rental rates were capped at 85% of the county's average rental rate for general sign up. 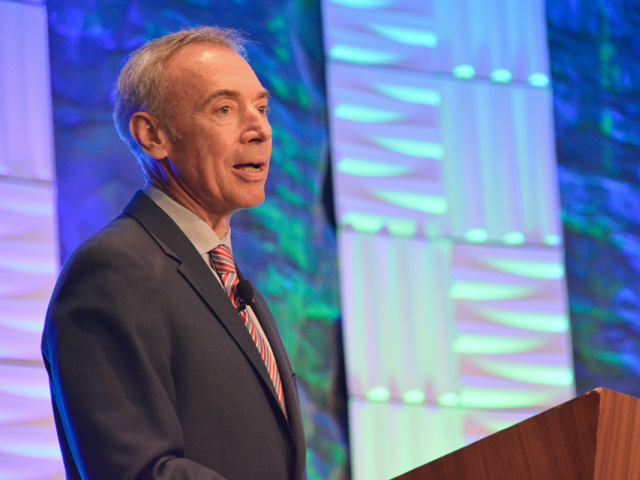