Trade is one topic drawing a lot of attention in Congress right now.

After testifying Tuesday before the Senate Finance Committee, U.S. Trade Ambassador Robert Lighthizer testified before the House Ways & Means Committee on Wednesday. Lighthizer largely testified about the benefits of the U.S. Mexico Canada Agreement, which the Trump administration could soon send to Congress. Lighthizer told lawmakers there were risks if the new USMCA is not ratified, the Washington Examiner highlighted: "We are going to have a catastrophe if this doesn't pass," Lighthizer said. "You are not going to have labor enforcement. There are tens of millions of jobs at stake." https://www.washingtonexaminer.com/…

The National Association of Wheat Gowers tweeted "Thank you, @USTradeRep Robert Lighthizer for your testimony before @WaysMeansCmte on the urgent need for #USMCA to be ratified. The U.S. food and ag industry is counting on Congress for this critical deal to pass! #FoodandAg #USMCANow #PassUSMCA

Lighthizer also said Wednesday that he and Treasury Secretary Steven Mnuchin will meet with Chinese officials at the G20 summit late next week in Japan.

A pair of farmers also testified Wednesday before the House Financial Services Subcommittee on National Security, International Development and Monetary Policy. The two farmers, one from Missouri and one from Virginia, largely testified about how they have been affected by retaliatory tariffs, mostly from China.

Ronnie Russell, a Missouri farmer and board member for the American Soybean Association, told the subcommittee this year has been one of the most challenging he has faced in 43 years as a crop producer.

"Over the past year I have endured threats to my farm I cannot control or predict," Russell said, pointing to tariffs. "These retaliatory tariffs have all but halted U.S. soybean shipments to china, which until last year was by far our largest export destination."

"Farmers are losing money on every acre we plant," Russell said.

Russell urged both the U.S. and China to negotiate so they could each drop their tariffs.

John Boyd, founder and president of National Black Farmers Association, and a Virginia farmer who grows corn, soybean and wheat as well as cattle and hogs, said, "Farmers are in a national crisis, a national crisis. I want to say it again."

Regarding negotiations with China, Boyd said other strategies should have been used before tariffs were considered. Though Boyd said he did not vote for Trump in 2016, the administration's trade policies were hurting the president's supporters. "Quite frankly, the president is affecting his base. The people who elected him were the farmers out in red states... We're facing a financial crisis."

Boyd then told lawmakers they should require USDA to set aside $5 billion for minority and small-scale farmers from the $16 billion trade aid funds.

Boyd added he was selling soybeans just a few years ago for $15 a bushels, but received $8 for soybeans last fall. Boyd also said minority farmers and small-scale farmers are not receiving an adequate share of Market Facilitation Program payments.

"Something needs to be done to help small-scale farmers and black farmers like myself," Boyd said.

Boyd added he could not get an operating loan this year and largely paid for his inputs with credit cards.

Boyd said his organization represents 109,000 in 42 states, but he cannot get a meeting with President Trump or Agriculture Secretary Sonny Perdue. "We have some real issues we want to speak to this administration about."

"The information they (ASA leaders) have is they only have imported 6.5 mmt from those commitments," Russell said.

Republicans in the Financial Services hearing turned to the need to approve the U.S. Mexico Canada Agreement as a way to provide more certainty to farmers and other businesses. Rep. French Hill, R-Arkansas, said if Democrats considered the importance of trade then the witnesses should be lobbying House Speaker Nancy Pelosi, D-Calif., to approve the USMCA. On tariffs, Hill said the impacts of tariffs are relatively small in the size of the U.S. economy.

"Not everybody agrees it’s a major, major downturn," Hill said, adding he was more concerned about inflationary impacts.

Rep. Denver Riggleman, R-Virginia, pointed out some statistics from the International Trade Commission on the USMCA, including a projected $2.2 billion growth in agricultural exports.

Boyd added, "Farmers want free trade. I would much rather have a good fair-market price for my commodity than having anything to do with getting in line to sign up for a program and do the wait game and the paper shuffle."

Boyd said creative ways were needed to reopen markets, "so we can get the prices back up so I can go back to farming." Boyd added he is a "cash and carry farmer," who doesn't have on-farm storage to wait for price rallies. 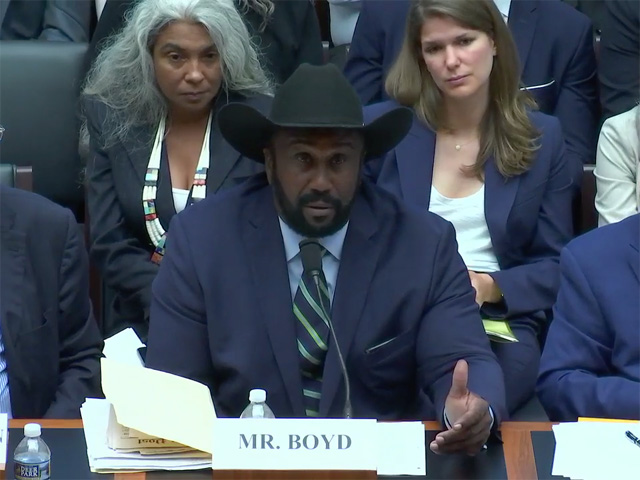 MIKE` WILHOIT
6/20/2019 | 11:24 AM CDT
I guess Mr. John Boyd doesn't remember the Pickford settlement where the USDA paid out a billion dollars to Black farmers in America.....