The U.S. Senate Environment and Public Works Committee will hold a field hearing on Missouri River management and the current flooding situation in Iowa, Missouri and Nebraska. The hearing will be heldat 8:30a.m. on Wednesday, April 17, in Glenwood, Iowa.

The Senate Committee on Environment and Public Works oversees the U.S. Army Corps of Engineers. Sen. Joni Ernst, R-Iowa, is a member of the committee.

Talking about the disaster Monday, USDA Undersecretary for Farm Production and Conservation Bill Northey spoke to members of the North American Agricultural Journalists in Washington, D.C.

One of the differences between last month's flood and some agricultural disasters last year was that farmers didn't have a fully insured crop in the field they could receive an indemnity for. There's more conversation about prevent-plant insurance, which wasn't an issue during hurricane season. Prevent-plant coverage will only pay a small percentage of a farmer's potential production costs, and normally farmers don't expect to use prevent-plant insurance for their entire fields.

"The other difference I saw, which was more anecdotal, was I did not see that much loss in stored grain," Northey added.

The swiftness of the flooding this time around caught producers off guard and the weather leading up to the flooding made it difficult for farmers to move grain out of the danger zone. For the most part, that grain is not covered in a property and casualty policy. "So it's very easy to get tens, even hundreds of thousands of losses," Northey said.

"On top of a time when economics are tough and the expectations are tough," Northey said. He added that the flood doesn't have large-scale impacts on crops or commodity prices. "In a flood, you are either terribly impacted, or you aren't impacted at all."

Northey noted Congress is looking at a disaster bill to allow some coverage of for those losses, though it's unclear just how that disaster coverage will look. "We don't have anything in our programs now," Northey said.

The Missouri Farm Bureau put out some initial estimates of acreage losses in Northwest Missouri.

"Initial estimates indicate almost 176,000 acres have been flooded in Atchison, Holt and Buchanan Counties in Missouri. This equates to almost 275 square miles. To put this in perspective, the entire Kansas City area is 319 square miles. The number of flooded acres also equates to 133,025 regulation NFL football fields.

Farm Bureau added, "If this land is not planted in 2019, the market value of the lost corn and soybean crop is projected to be $95 million in these three counties alone. This does not include losses to any other crops, livestock or the loss of crops stored in the floodplain."

The Senate committee event will be a public hearing and members of the public are encouraged to attend. 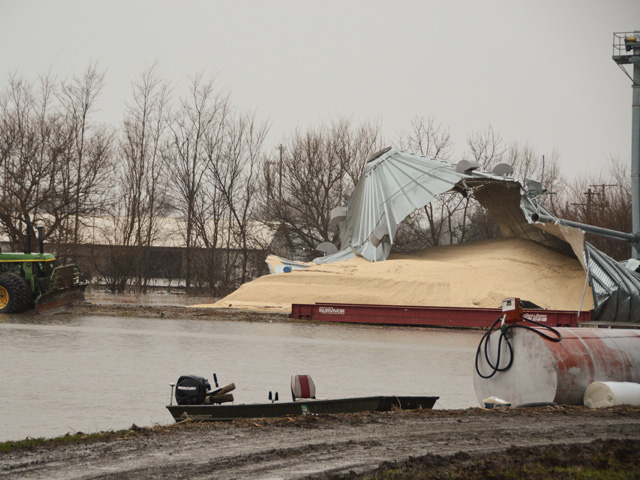