OVERLAND PARK, Kan. (DTN) — In a speech here Thursday evening to an agricultural commodity futures conference, Gregg Doud, the U.S. chief agriculture negotiator, listed the many problems the United States has with agriculture and trade in China and other countries, but did not mention any achievements in the negotiations with the Chinese.

The speech seemed designed to shore up support in the agriculture community for the Trump administration’s trade agenda as farmers and agribusiness executives become impatient about lost exports. The conference was organized by the Commodity Futures Trading Commission and Kansas State University.

But when asked afterwards why he had not spoken as other Trump administration officials have about progress in the Chinese talks, Doud said, “I can’t talk about that publicly. I don’t want to lead anybody into the notion it’s going well or going poorly. We’ve still got work to do.”

Doud began his speech by holding up the Trump administration report that showed China taking advantage of the United States in a number of ways. Doud did not mention the issues of steel and aluminum, but cited the ways in which China blocks U.S. agricultural products through nontariff barriers.

“I defy any of you to read the report and not be a hardliner on China,” Doud said.

Doud repeated his previous statements that he has told the Chinese that they should not subsidize agriculture the way the United States did in the 1980s when the U.S. government ended up owning large amounts of commodities. Doud said he told his Chinese counterpart in what may have been their 18th meeting during the current negotiations that China should expose itself to the vagaries of supply and demand even if it has to support five million tons of corn in some future year.

Doud said his counterpart “bristled” at that statement, and said he is not sure the world could handle China buying that much corn.

“They don’t want that exposure,” he said.

He noted that the United States recently won a case against the Chinese subsidies in the World Trade Organization.

The U.S. pork industry needs to increase its exports from 10 percent of production to 25 percent, but exporting to China is a problem because China objects to the U.S. pork producers’ use of ractopamine, a feed additive.

Doud said Congress must approve the U.S.-Mexico-Canada Agreement (USMCA) because Mexico and Canada take 28% of U.S. farm exports and because approval of the new agreement is key to other trade deals.

“If USMCA, God forbid, gets stuck in the chute and we can’t get a trade deal with Japan, we have a problem,” Doud said.

The U.S. trade relationship with Japan “goes back decades” and the Japanese taught the United States how to meet customer demand in another country, he noted.

Now Europe, Canada and Australia have deals with Japan, but “that relationship we have with Japan is very special and we have to figure out a way to get back in there.”

He did not mention that Japan was in the Trans Pacific Partnership negotiations from which Trump withdrew.

Doud said he has no idea how the United Kingdom will work out its planned exit from the European Union, but he expressed great frustration with the EU attitude toward agriculture and its unwillingness to import U.S. food products and technology.

“We cannot continue to let the EU get away with the false narrative,” Doud said, calling EU agriculture a “nonscience-based, backward protectionist regime.”

He noted that Irish Prime Minister Leo Varadkar recently said that if the United Kingdom does a post-Brexit deal with the United States, he does not want Ireland to become a “back door” for the entry of chlorinated chicken or hormone-treated beef.

“These kinds of sound bites are unacceptable,” Doud said. “You let this fester and people begin to believe there are problems with our product.”

“Everyone knows how U.S. agriculture thinks. We wake up and think how are we going to feed 9 billion by 2050. The French have no interest in any of that. Europeans are undermining us at every point in these international fora. This is something we have to continue to work on,” he added.

Doud concluded, “My point is, all the easy stuff, the low-hanging fruit, was accomplished years ago. A lot of what we have left is very difficult.” 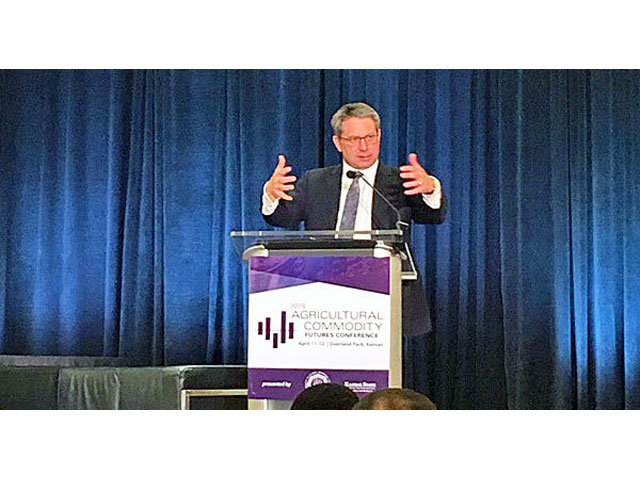