For a group of American farmers, their spouses and myself, Mato Grosso was the centerpiece of two-week whirlwind tour of Brazil as we heard about the double-crop production, heard about sugar cane ethanol and learned about the Cerrado reserves that basically keep further Brazilian crop expansion in check.

When we planned this trip, time and costs were factors. To get the most time in country as possible, I connected with a tour company, Rupiper Tours out of South Dakota, which just happened to have two trips planned in late January and early February specifically oriented around the soybean harvest and second-crop planting in Mato Grosso. Going with a larger group, I knew I would lose some one-on-one focus with the people I interviewed along the way, but I also knew I'd always be around someone who could interpret Portuguese and knew the area.

It really could not have worked out better. The tour had more than 35 people, mostly farm couples from across the Midwest and Canada. There was the usual green-versus-red pride among the farmers and if ever I was at a loss for a question, the farmers had plenty of their own. They wanted to know everything from how many times Brazilian farmers sprayed, how much fertilizer did they use and what was their planting population on safrinha corn crops. We had one farmer who didn't go into a field without pulling out a measuring tape to check row widths.

We ran a lot of math converting hectares to acres, metric tons to bushels and reals to dollars.

Our tour started in Amazonia, concentrated heavily on south-central Mato Grosso, then ended in Parana. At first, I didn't think I'd learn much regarding agriculture in Amazonia, but land values and reserve hectares required for Amazon farmers was a big topic. We toured a papaya and banana farmer who saw the value of his land soar once construction was finished on a 2.2 mile bridge across the Rio Negro River was finished in 2011. Before that time, like everyone else, the farmer had to deliver his fruit across the river to the city of Manaus by ferry. The bridge allowed him to expand his crops and get more value for them by trucking his goods across the vast river. Manaus, a city of 1.7 million, is still largely accessible by most of Brazil only by river.

With U.S. agriculture's concentration on Brazilian production, I tried to gauge what was happening in Mato Grosso and Parana, but any information I got was largely anecdotal because of the magnitude of the states. It's like farming anywhere in that the crop might be bad right there, but that's not necessarily the case across the whole state. For instance, on Tuesday, before our tour headed to the airport, we visited a soybean, corn, wheat farmer in southern Parana state. The farmer, who grew about 4,367 acres, said his soybean yields were just half of what they were last year -- he normally averages close to 70 bushels an acre -- and he indicated yields were down everywhere around him. His 21-day-old corn stand also was infested with caterpillars that were eating on the leaves.

Still, it's also kind of a big deal when a farm operation such as Amaggi switches its safrinha acreage to dramatically increase its cotton crop.

And that shot above of both green and red combines harvesting soybeans is one of those scenes I've waited years to see in person. I only wish I had a drone at the time to get some photos from above.

The American farmers I was with were impressed with the breadth of machinery on Mato Grosso farm operations. One of the first things we did in Campo Novo do Parecis was visit the John Deere and Case IH dealerships. One day we're staring at a million-dollar cotton picker, and a few days later we're doing the math as the manager for a large farm explains they ordered 20 new ones this year. (Oh, and a hot tip for U.S. farm companies: If you want to sell more memorabilia such as, oh, say John Deere caps, maybe you should put the country on that merchandise. American farmers were a little disenchanted they could not get a John Deere or Case IH hat or shirt that also said "Brazil" or "Mato Grosso" on it.)

Mato Grosso farmers also stressed they don't see themselves as competitors with U.S. farmers. Instead, they said they see U.S. and Brazilian farmers both serving the same purpose of helping provide food to a growing world. They see enough room for farmers in both countries to continue selling crops and livestock around the world.

It also was great to get away from U.S. politics for two weeks. On our entire trip, I had just one conversation about President Trump, Democrats and farm programs. But talking to farmers and others in Brazil, they have high hopes for new President Jair Bolsonaro. While outsiders were surprised by his election, the Brazilians I encountered were fed up with the corruption from the Socialist Party that had led to criminal charges against two of the past three presidents. Corruption had slowed and increased the costs of promised infrastructure improvements while farmers also look to the Bolsonaro to reduce some of their regulatory burdens.

The reserves required for both the rain forest in the Amazon and Cerrado -- Brazil's savanna or open range of grasslands and smaller trees and forests -- were a big topic. Reserves are untouched land set asides required by farmers than can range as low as 20% in some eastern states and older farms to as high as 80% in newer farmland broken from Cerrado land in Mato Grosso. Farmers in Mato Grosso were proud to note they farm just 12% of the land base in the state while 25% of the ground goes to livestock pasture, yet farmers and ranchers also own more than 40% of the protected lands in Mato Grosso. While there is some insistence that there are no plans to loosen the reserve requirements, there are expectations that Brazil boost production and increase infrastructure while also scaling back the regulatory demands on farmers. U.S. farmers ought to pay close attention to what happens going forward because if the Brazilian government starts to dial back on reserve requirements, that could open up a lot of new farm ground in short order. 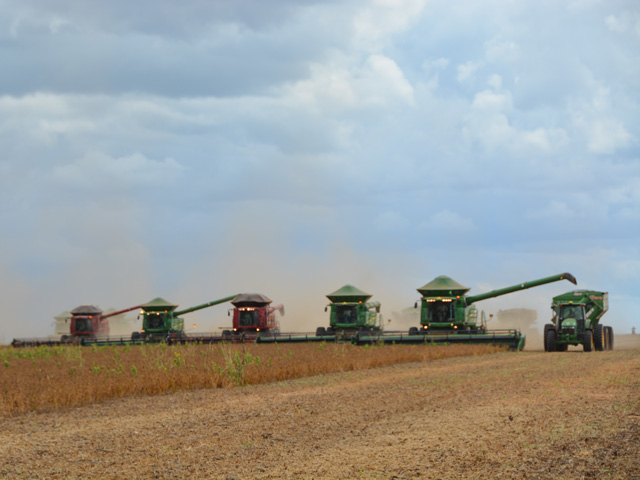