King, who President Donald Trump called "may be the world's most conservative human being," won the Iowa 4th in 2016 by 23 points. But Change Research shows King sitting at 45% support while his novice Democratic opponent has 44% of the vote. The poll showed an overall negative view of King in the district despite a still favorable view of President Trump.

I spent much of Saturday driving through much of the rural area of the Iowa 4th (the state cross country meet was in Fort Dodge) up Highway 71, across Highway 20 and back down highways 39 and 59. I'm just going to say I saw a lot of King political signs, and a lot of GOP signs in general. The 4th District is the most conservative part of Iowa and those rural folks aren't budging.

King, though, continues courting controversy. He endorsed a white nationalist mayoral candidate in Toronto, Canada, earlier this month, for being "pro western civilization." Then, the Washington Post reported last week King met with members of a far right party in Austria that was actually started by a former German SS officer while on a trip funded by a Holocaust memorial group. King, after condemning the shootings of Jews in Pittsburgh, told the Washington Post about Austria's Freedom Party and its immigration views, "If they were in America pushing the platform that they push, they would be Republican."

As the Washington Post noted, a lot of King's supporters in Northwest Iowa brush office his immigration stances.

Even before the Synagogue shooting and King's comments, the Sioux City, Iowa, Journal endorsed King's opponent for the first time. "Those were not easy words for us to write." The Journal noted King's constant inflammatory remarks. "Each time King immerses himself in controversy, he holds up this district to ridicule and marginalizes himself within the legislative body he services, neither of which provides benefit to the Iowans who live and work here." https://siouxcityjournal.com/…

Land O'Lakes also announced Tuesday, after hearing rumblings of people boycotting its brand, that the dairy cooperative will withdraw its support of King. https://www.landolakesinc.com/…

King is still a favorite to win. Cook Political Report recently moved King's race from "likely R to lean R." A week out Nate Silver of FiveThirtyEight.com, gives King an 83.6% chance to win his race with a 51-45 vote margin.

King's opponent, J.D. Scholten, is a lanky 38-year-old former college and minor-league baseball player. And he has grabbed the mantle of being a likable guy who also understands that Northwest Iowa, because of its prevalence of packing plants and livestock, requires a lot of immigrant labor.

"There are two hog plants — one’s about to open and one’s been open for over a year — on two different sides of the district, and both executive directors have talked about a need for an immigrant workforce," Scholten told Rolling Stone in an interview this week. "And then one of the grain elevators last harvest I went and talked to, and those folks were talking about how they needed 39 people, seasonal workers, to help with their harvest last year. They didn’t get one American citizen to apply. For us to have such an extreme representative that is just so far removed from what this district is on this issue, it’s absolutely insane. It’s so bizarre." https://www.rollingstone.com/…

Scholten has not gotten any more Democrats to vote early for him than King's 2014 opponent drummed up during the last mid-term election.

Iowa's Secretary of State's office posts daily statistics on absentee ballots. Iowans, as of Monday, have requested nearly the same number of ballots as 2014 but have returned 12,889 fewer votes. While absentee votes from a registered party don't necessarily mean people voted for one particular candidate, but absentee ballots do reflect trends in overall party enthusiasm.

Absentee votes don't quite tell the whole story. Republicans dominated Iowa Democrats in 2014 despite a 9,088-vote gap in absentee ballots filed before Election Day. The spread right now, though, in Iowa is a 27,757 Democratic-ballot advantage.

In another closely watched congressional race in Iowa, Democrats have significantly widened the spread on absentee ballots. The 3rd Congressional District with incumbent GOP Rep. David Young has returned 95,246 ballots, 6,871 more than the same date four years ago. In 2014, Democrats had fewer than a 1,000-vote advantage in absentee votes, but the spread this year has grown to a 10,184 advantage for Democrats. Cindy Axne, a surburanite former state employee and community activist, has a narrow lead in the latest poll. Young has had both President Trump and Vice President Mike Pence stump in his district this month.

Still, Sen. Charles Grassley, a Republican, told reporters on Tuesday that Iowa Republicans are fired up, which Grassley called "the Kavanaugh effect" referring to the nomination battle over Supreme Court Justice Brett Kavanaugh. Grassley said there has been a turnaround in Young's district, as well for Rep. Rod Blum in Iowa's 2nd District, though Blum is also down 13,399 absentee votes thus far, but Blum lagged badly in absentee votes in 2014 and still won on Election Day as well. Grassley maintains the GOP base will show up next week. 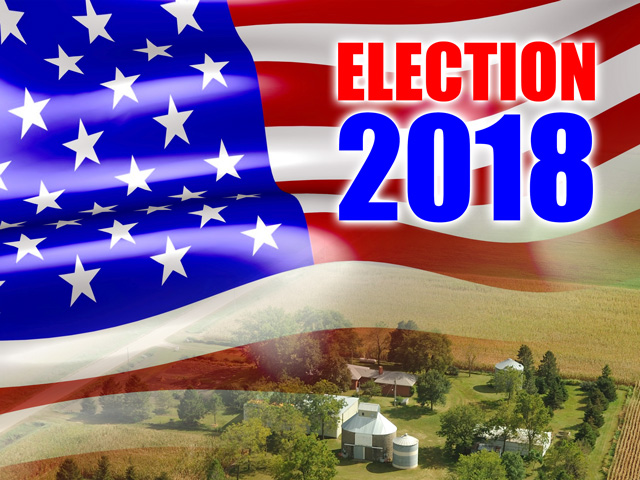