Pointing to the Chinese tariffs placed on agricultural products on Wednesday, American Farm Bureau President Zippy Duvall said, "This has to stop."

Duvall noted, “Farmers and ranchers are, by necessity, patient and optimistic. We know markets ebb and flow. But China’s threatened retaliation against last night’s U.S. tariff proposal is testing both the patience and optimism of families who are facing the worst agricultural economy in 16 years. This has to stop."

He added that the growing trade disputes are putting farmers and ranchers in a precarious financial situation. "We have bills to pay and debts we must settle, and cannot afford to lose any market, much less one as important as China’s," Duvall said. "We urge the United States and China to return to negotiations and produce an agreement that serves the interests of the world’s two largest economies."

USDA's Foreign Agricultural Service reported the proposed 25% tariffs would impact approximately $16.5 billion in U.S. agricultural exports to China. Soybeans, corn, wheat, sorghum, cotton, beef, cranberries oranges and tobacco were tapped for possible for tariffs. China, however, played it cool by announcing the proposal but with no set date for implementation.

This action follows China's move on Monday to hand down tariffs on $3 billion worth of agricultural goods, including pork. Tariffs on U.S. pork products were kicked up to a range of 37% to 45%, depending on the product. Offals, the main U.S. pork exports to China, saw tariffs go from 12% to 37%. Those tariffs immediately went into effect.

Tom Sleight, president and CEO of the U.S. Grains Council, said in an interview that the U.S. has already been down this road with China and Distillers Dried Grains (DDGs) and sorghum. "We know how this rolls and watching when tariffs are going to be imposed with ships in the water, that kind of thing, in addition to the overall price effects."

Chinese buyers can buy U.S. products, but they have to make sure it gets shipped and arrives in China before the imposition of tariffs, Sleight said. "It doesn't matter when they bought it, but when it arrives. So you kind of have to play a tariff roulette," he said.

When China basically moved out of buying U.S. DDGs it opened up the opportunity for others to buy, Sleight said, but the prices have not been as strong as they were when China was buying large amounts of DDGs.

"They picked up the volume, but the price dropped like a rock," Sleight said. "You make the trade, but at a lower overall price, which isn't helpful for farmers' interests."

Sleight thought it was almost humorous the Chinese government may further increase tariffs on DDGs. "They already have got trade-prohibiting tariffs on DDGs," he said. "Now they want to throw another 25% on there. You're like, what the heck?"

Agriculture Secretary Sonny Perdue was in Ohio on Wednesday. In quotes from USDA Radio, Perdue sought to ensure farmers that they will be OK. "On the phone with the president last night. He wanted me to assure the farmers and producers of America they will not be allowed the casualties in a trade dispute. He will support them every step of the way," Perdue said.

The secretary added, "These are announcements. We got 30 to 60 days for negotiation to do that. They are not going to take effect." https://goo.gl/…

Markets, though, have already been reacting. May soybeans were down 22.75 cents on Wednesday and November beans were down 23.25 cents. May corn was down 7.50 cents. The April hog contract rose, but was still $3.70 cwt below Monday's high.

The trifecta of soybean groups -- American Soybean Association (ASA), the U.S. Soybean Export Council (USSEC) and the United Soybean Board (USB) -- combined to point out the U.S. soybean industry has spent the past 36 years working to build U.S. soybean exports into a $14 billion juggernaut going to China. On Wednesday, China proposed increasing the tariff on soybeans on U.S. soybeansfrom 3% to 28%.

“ASA has consistently raised our significant concern since the prospect for tariffs was raised. Now this is no longer a hypothetical, and a 25% tariff on U.S. soybeans into China will have a devastating effect on every soybean farmer in America,” said ASA President John Heisdorffer, an Iowa farmer. “We believe strongly that soy can help reduce our trade deficit by increasing competitiveness, and we will continue to work with our partners at USB and USSEC to show how that’s possible.”

Several groups, including the National Sorghum Producers and National Corn Growers Association lamented that there are no winners in trade wars. And contrary to Perdue's comments, farmers already believe they are casualties.

“There are no winners in a trade war, only casualties," said Wesley Spurlock, a Texas farmer and chairman of NCGA. "As trade tensions continue to mount with China, the expanded list of tariffs on food and agriculture exports are making America’s farmers the first casualties."

Spurlock added there is a window of opportunity to reach a deal with China and Spurlock's comments seem directed at the current occupant of the White House. “We need to be measured, professional and business-like in our approach to keeping the trade doors open with China," Spurlock said. "Equally important, we need the President to understand the implications that these trade actions have for America’s farm families."

U.S. Wheat Associates and the National Association of Wheat Growers pointed out China imports more than 61 million bushels of wheat in the 2016-17 marketing year, making it the fourth-largest customer of U.S. wheat. Mike Miller, chairman of U.S. Wheat Associates and a wheat farmer from Ritzville, Wash., said, "Farmers across the country have invested a lot of money and time over the years to develop a Chinese market that has great potential to buy even more American wheat. Now that effort is in jeopardy at a time when big global supplies have already pushed farm gate wheat prices down to unsustainable levels." 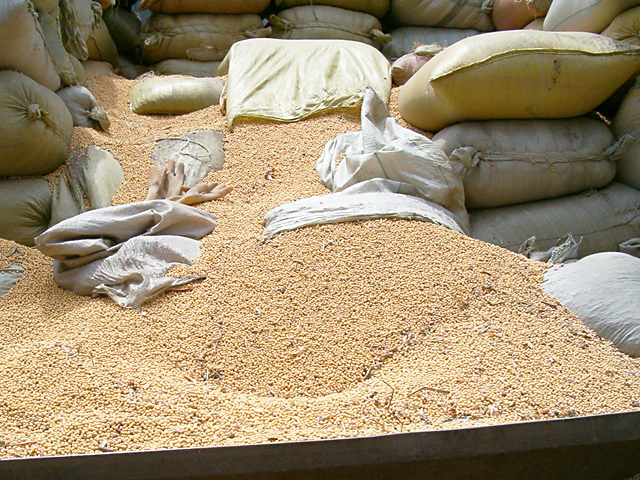