President Donald Trump and congressional Republicans got to do their own version on an end-zone dance Wednesday. The capped a tumultuous first year of the Trump presidency with a major victory with the $1.5 trillion package of tax cuts and reshaping of the Tax Code.

The victory event at the White House Rose Garden was well deserved. You can stack up all of the criticism against the tax bill, such as it mainly benefits the wealthy and corporations, but all of those arguments are damned when an average couple does their taxes and gets a bigger refund at the end of the day.

A Washington Post editorial describes the bill as "a victory for corrosive partisanship" and "fiscal irresponsibility." Yet, the partisan nature of the bill fits right along with President Obama's main early achievement, the Affordable Care Act, another partisan, ill-conceived bill that didn't deliver on the promise.

First-year presidents generally have to learn about all of the campaign promises they don't get to keep. But after a year of raging at everyone and their dog on Twitter and in speeches, after a year of declaring white is black and black is white, after a year of further dividing American politics through his own cult of personality, President Trump was able in one massive legislative victory to create sweeping tax changes, open up the Arctic National Wildlife Refuge to future oil drilling and eliminate the individual mandate in the Affordable Care Act (Obamacare).

Democrats got the Alabama Senate race, but they are essentially reeling from the loss on this bill. The president was able to deliver to GOP donors and his base "an incredible Christmas gift" of lower taxes regardless of the long-term net implications of the tax cuts -- and it is likely a good bet the well-heeled will be able to drive armored bank trucks of money through the new business loopholes created.

Unlike Obama at the end of 2009, Trump has the benefit of riding a strong economic wave closing out 2017. Outside of the agricultural commodity markets, the American economy is showing confidence under Trump. The Standard and Poor's 500 is up just under 19% over the past year. The unemployment rate nationally is 4.1%. Bloomberg also reported this week U.S. single-family housing starts are now the highest in a decade and homebuilder confidence this month is the highest level since 1999.

That's a pretty amazing set of numbers to stack up together at the end of the first year of a presidency. Stocks, including 401(k) holdings, are rising. Unemployment is down and people, especially in some parts of the country, are buying and building homes again. As that famous Democratic operative James Carville declared during the 1992 campaign, "It's the economy, stupid."

And Trump, with a natural-born gift of taking credit for all that is good and blaming others for anything ailing, gets to pocket the credit for tax cuts. Not only has he sold ice to Eskimos, but it's the best ice ever, way better than any other ice people have seen before.

"It's been an amazing experience, I have to tell you," the president said in his victory lap at the Rose Garden on Wednesday. "Hasn't been done in 34 years, but actually, really hasn't been done, because we broke every record. It's the largest -- I always say, the most massive -- but it's the largest tax cut in the history of our country -- and reform -- but tax cut. Really something special."

To farmers who have been convinced the estate tax is the bane of their existence, the president will be able to walk into the American Farm Bureau Federation convention in a few weeks to roaring applause from the largely conservative group. He'll most certainly come close to repeating a line he said Wednesday. "One thing, very important, for the farmers -- the great farmers, and the great small-business owners, that were forced to sell their businesses at bargain, basement numbers -- we have provided, for the most part, estate tax is wiped out. So they can keep their farms in the family, and that to me is a very big factor -- very big."

There will eventually be a reckoning for adding another $1.5 trillion to the national debt, but like so many federal budget challenges, the pain will be felt down the down the road by the inability of government to function. The $1.5 trillion, spread out of 10 years, is essentially akin to funding the U.S. Department of Agriculture over 10 years on a credit card. USDA's Fiscal Year 2017 budget was $155 billion.

Most of the individual tax cuts and provisions expire at the end of 2025. As I stated earlier in the week, that will essentially turn the 2024 presidential and congressional election into a referendum on the tax cuts.

For now, however, Trump may end up proving that low approval ratings nationally and globally in the first year of a presidency don't mean much if you can sell a tax cut in a strong economy. 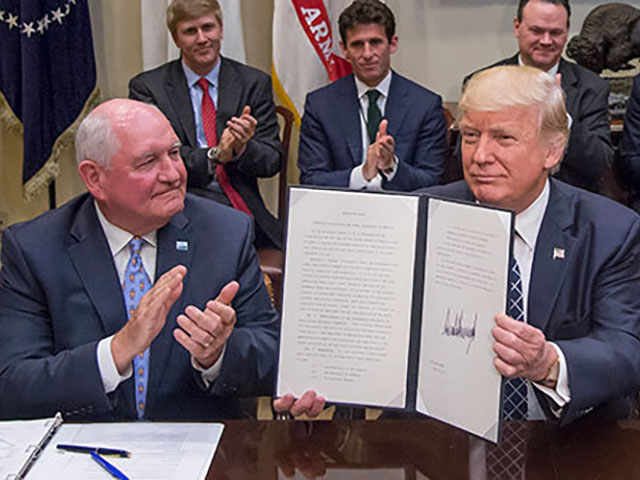