The House passed its tax-reform bill Thursday and the Senate Finance Committee advanced its version of the bill. Both votes were contentious and there are a lot of moving parts to the bills.

I was on the road this week, but I was getting a lot of questions about the bill. So I called up Paul Neiffer, a principal at CliftonLarsonAllen and asked him to offer some explanation on a few issues in the tax bill.

As a farmer running a business, would eliminating the state and local taxes (SALT) deduction impact you or can you keep taking those deductions?

"A farmer operating as a C Corporation would be allowed to deduct state income taxes. Most of our farmers farm as a sole proprietor or as a partnership or an S Corp. That income flows in under their personal return and in that situation, they would not be allowed to deduct their state and local taxes.

"Income taxes paid to the state won't be deductible on the 1040.

What about property taxes because that seems to be a big concern among some farmers?

"Property taxes on a personal home, however, may end up not being deductible in the final legislation.

"For the rank-and-file farmer who has a couple of kids, certainly raising the Child Tax Credit up to $2,000 (in the Senate bill) is actually a pretty good deal."

Anything concern you about the impact of tax changes on your clients?

The 17.4% deduction is a specific deduction in the bill for pass-through business income. The deduction will be phased out for couples making more than $150,000 taxable income or $75,000 for individuals.

The Section 179 bonus depreciation, which would allow up to $5 million in capital equipment write offs, is often limited at the state level. Can that come back to bite people?

"What's happening there on the federal side is you are allowed deduct your farm equipment, but on the state side, some of the larger farm states don't allow that ... So a lot of these farmers are going to be facing a much higher state income tax bill. Now that would be true if we had tax reform or not."

What is the difference between Section 179 deduction and a similar immediate expensing provision in the House bill?

"The difference is with immediate expensing the farmer can elect out. He might say from a self-employment standpoint he might want to take this depreciation over the next seven years instead of taking it all upfront. So he or she can elect out of bonus deprecation, which means it is regular depreciation, but you can still use Section 179 to get your income down to where you want it to be."

"It certainly has helped farmers they can carry back five years. Under the new bills, they can go back one. I don't think after the next couple of years that would be a big deal.

"The House bill is certainly complicated enough on the top tax rates. I think the Senate bill is easier and much fairer to the farmers. Under the Senate bill, farmers would get a tax reduction no matter what their tax rate is. As with the House bill, there is bulge in the middle where their taxes could go up 10%."

The House had language that would have taxed landlords with self-employment taxes, but that was removed. That rallied agricultural groups to get that out of the House bill.

"The Senate Finance Committee still might slide something like that in the final bill. I hope they don't."

"The doubling of the estate-tax exemption, I like that. It would be great if the estate tax went away completely, but doubling it, probably for 95% to 99% of our farm families, that probably eliminates them paying the federal estate tax."

What about the loss of the Section 199 Domestic Production Activities Deduction?

"The Senate, what they have done is replaced it with that $17.4% deduction."

Getting rid of the interest deduction a big deal?

"What the Senate has done is carved out a provision where if you want to deduct interest, you can but you have to stretch out the depreciation life on your assets. You could still take Section 179, though.

"On another thing, the fruit guys, the vineyard guys, when they do a new planting they have to wait for five years to start depreciating those. Right now, but the Senate and the House say if your income is under $15 million, or under $25 million, you can deduct that immediately. So that would help out those guys on their cash flows."

So for the Average Joe, their individual taxes may be simpler, but that doesn't seem to be the case with businesses.

"This is not a simplified act. Not even close." 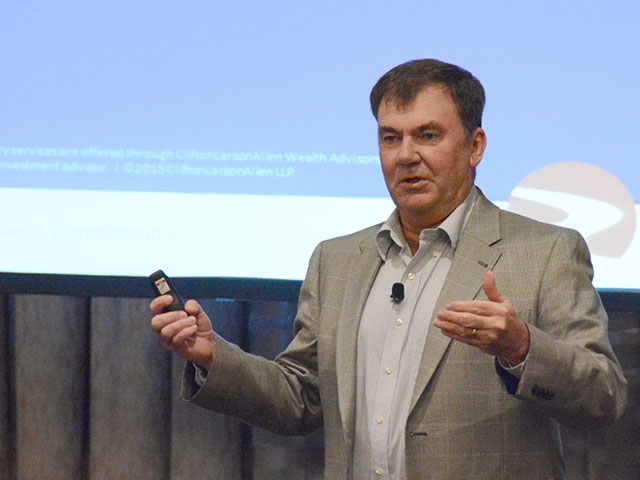