This is the final look at the change in ending stocks for the major U.S. crops from the first USDA balance sheet projections given in the May WASDE report to the final figures furnished 18 months later the following November.

This time we take a look at U.S. wheat with the change in ending stocks on the right hand axis and on the left hand axis we plot the 18 month change in exports, total domestic use and production, all in million bushels.

One of the biggest negative revisions was in the 1991-92 season when final ending stocks came in 177 million bushels lower than had been projected in May 1991 due to production 91 million bushels less, domestic demand 53 million less but exports were 157 mln bushels higher.

The other largest negative revision was in the 2007/08 season where ending stocks were 163 million bushels less than first estimated based on production 123 million below what had first been estimated and an export figure 288 million bushels greater than was first projected.

As a final note, the USDA estimates on wheat ending stocks should be a little more accurate than those for corn and wheat since the USDA has already released the winter wheat seedings report and a good bit of new crop wheat export business has already been booked. 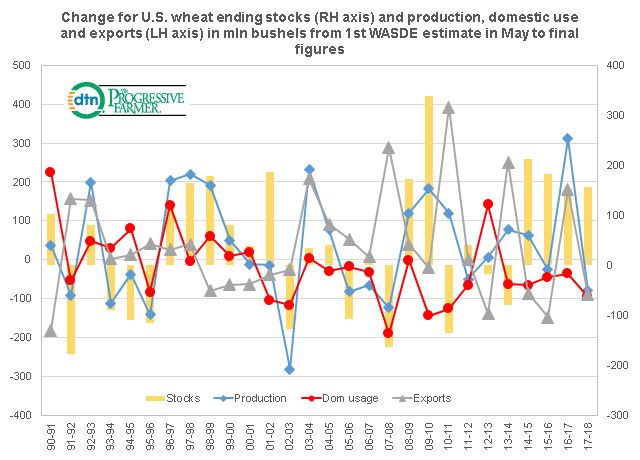