Even though the latest USDA crop progress report showed 81% of the nation's corn planted which is equal to the five-year average, seedings remain behind in much of the Northwest Midwest where the growing season is shorter.

As we have noted in prior posts, the USDA developed a weather adjusted corn yield model that in addition to a trend variable, explanatory variables used in the model are mid-May planting progress, July weather (precipitation and average temperature), and a June precipitation shortfall measure in selected years.

These variables help explain previous yield variations and deviations from the trend.

The reason for including mid-May planted progress is its importance for yield potential because that allows more stages of crop development to occur earlier, before the most severe heat of the summer.

These eight states typically rank in the top 10 corn-producing states, and accounted for an average of 76 percent of U.S. corn production over the estimation period.

Normal mid-May planting progress was determined to be 80% and with the model generating a coefficient of 0.289 for that term in the corn-yield model, 10-percent more of the corn crop planted by mid-May raises the expected corn yield by 2.89 bushels per acre.

10-percent less of the crop planted by the middle of May reduces the model's per-acre yield expectations by 2.89 bushels.

This piece shows the weighted corn planting progress of theeight states as of May 15thvs. the percent deviation of the weightedeight state trend yield.

First off, we note that the more recent 10-year average for the eight states planting progress is now 72-74% vs. the 80% originally used.

Planting progress was quick those two years since there was no extended rain delays and in fact, there was hardly any rain resulting in drought conditions that knocked yields off more than 20% from the 30-year trend.

1993 and 1995 were slow planting seasons and yields those years were well below trend, yet relatively slow plantings in 2008, 2009 and 2013 still resulted in decent yields.

Work we have done does show that there is a loose relation between planting dates and yields as summer weather conditions are far more influential with late plantings appearing to have more impact on actual vs intended corn acreage. 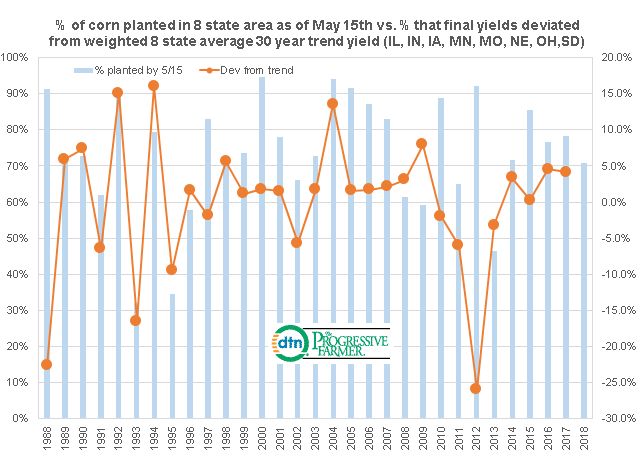