Similar to what we did with corn, this graphic shows the change in U.S. soybean ending stocks from the first WASDE report given in May to the final one for each marketing year furnished in November the following year plotted on the right hand axis in million bushels.

To answer why the stocks estimate was different we also plot the 18-month change in the production, crush and exports on the left hand axis also in million bushels.

Looking at the individual correlations it appears that production less than had originally been projected is the biggest reason why stocks end up lower with a 44.3% correlation rate.

We had long suspected that the USDA understating overseas demand was often the reason why the final carryout figure was lower than the projection made 18 months earlier but the correlation here was just 28.4% with the correlation between the change in the crush estimate and stocks a mere 10.6%.

Note that the standard deviation of production shows this component is the most volatile of all four variables being output, the amount of soybeans that are processed, the amount exported and the amount left over at the end of the marketing years.

Finally, though the 2017/18 figures are not yet final the last ending stocks projection for this year was put at 530 million bushels, 50 million more than first estimated in May 2017 and if this is the case come November would be the largest positive differential since the 2005/06 season. 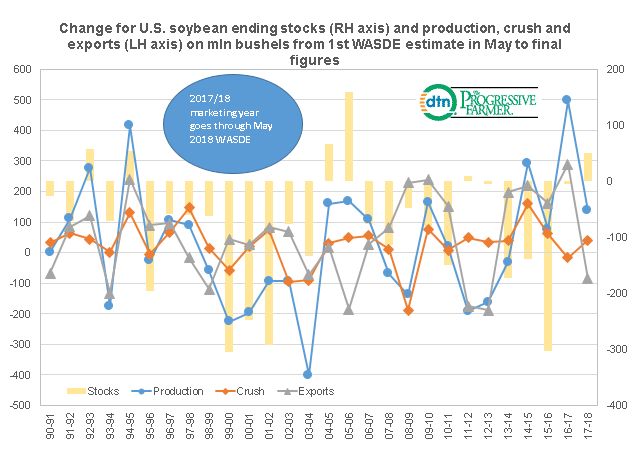