April live cattle dropped $1.05 in the week ended Oct. 14 to $154.82, the peak of futures prices in early 2023, but also back below the 100-day average at $155.70. In general, April cattle are trending gradually higher, but short-term momentum has turned down as cattle prices are encountering bearish headwinds from rising interest rates and worries about the possibility of a slower economy ahead. Relative strength over the past month shows the path of least resistance for April cattle is currently down. Boxed beef prices trended lower in August and September, but have held sideways so far in October. It is no secret that cattle inventory is shrinking with the beef cow herd last seen at 30.4 million head in the July inventory report and still falling. In spite of numerous worries about the economy, cash cattle prices are gradually working higher, trading at $145 in the South last week and near their highest prices in seven years. The futures market is choppy, but remains on an upward trend with important support at the September low of $153.42.


April feeder cattle fell $1.82 in the week ended Oct. 14, to $180.55, near its lowest prices since mid-June. Feeder prices have been on a downhill slide since mid-September, pressured by economic worries, while December corn prices have held firm, near $7.00 a bushel. The good news for feeder prices is, because live cattle prices have held steady to higher, feeders have become more reasonably priced in relation to live cattle and should have support down here near four-month lows. Technically speaking, feeder prices show no sign of turning higher just yet and the relative strength index of 37.80 on Friday shows the path of least resistance for prices remains down for now. Fundamental support should be near, but the market is still waiting for a technical sign of support.


April lean hogs closed up $2.55 per hundredweight last week to $86.95, a curious bullish response to the $13 sell-off that happened in the two weeks following Sept. 20. The sharp drop extended the contract's lowest prices this year and triggered a big liquidation in noncommercials holding hog contracts long, but also appears to have set up what could be a sudden bullish reversal. Fundamentally, the sell-off in hogs was related to a collapse in negotiated cash prices and worries a slower U.S. economy could pull down pork demand. The rebound was likely triggered by a surge in China's national hog price after Chinese markets returned from holiday last week. China's hog price, as of Friday, was up over 150% from its lowest prices of 2021 and appear to be signaling the country needs more pork. Technically, April hogs may be in the midst of a bullish reversal, but given the April contract is still trading below cash, the overall expectation and trend remains bearish.

Todd Hultman can be reached at Todd.Hultman@dtn.com . 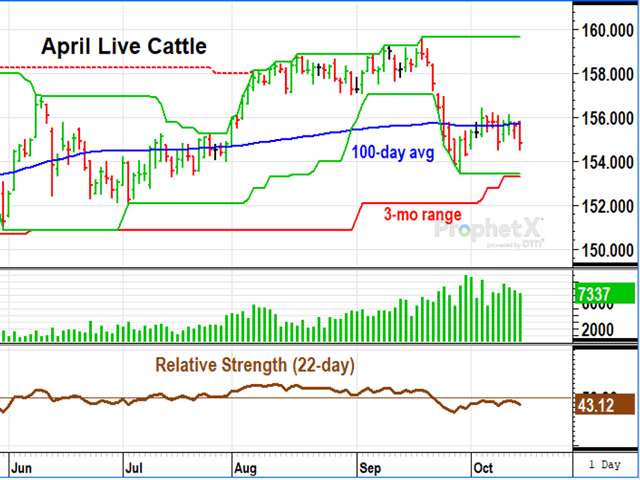