October heating oil has taken over as the most actively traded heating oil contract, but we think taking a look at the September contract concurrently could offer clues about the overall direction of this market. As we saw Friday, September heating oil pushed above the July 28 corrective high at $3.73, effectively ending the downtrend which began back in mid-June. The October contract also took out its analogous high at that level, and overnight the most actively traded contract was also able to push through that level of technical resistance. With this surge through that important technical objective, as well as moving through the 50- and 100-day moving averages, we think heating oil is poised to make a meaningful run higher through the past two months' downtrend. The stochastic measure of momentum shows a strong trend in place which should be well supported on any corrective setback. These issues considered, a supportive policy in heating oil is advised with upside objectives between $3.82 to $4.00 expected if strength can be maintained above the late July corrective highs.


With the aforementioned condition in heating oil, it naturally begs the question: Will that market be a leading indicator to the larger crude oil market? As one will notice quickly, the dominant technical feature in the crude oil market is the entrenched downtrend dating back to mid-June. Every single corrective rally has turned out to be a selling opportunity with bears fully in control. In the process, there are now a slew of corrective highs left in the downtrend's wake which will offer resistance to additional corrective rallies. After performing a simple Fibonacci retracement from the mid-June highs at $123.68 down to the corrective lows at $85.73, we see the 23.6% retracement line up well with the August 11 highs at $95.05 and the 38.2% retracement run across near the July 29 corrective highs at $101.88. We would look to these two levels as technically significant and areas which need to be traded through and held before a more supportive stance can be taken in crude oil. Chiefly, the $95.05 corrective highs must be surmounted in order to flip trends enough to move to a neutral or cautiously bullish policy.


On the other end of the energy complex is natural gas, which has enjoyed an altogether different technical construct over the last two to three months. Natural gas has witnessed an impressive rally off the early July lows, complete with a corrective sell-off into early August and a rally through the July 26 highs. Therefore, trends are up on all applicable scales with spot prices having traded through the June 8 highs twice before setting back modestly. After leaving a potential triple-top formation with last week's highs, spot prices have surged through that resistance at $9.66 overnight, which should promise additional gains straightaway. The key for natural gas bulls going forward will be holding the former highs/resistance which should now act as new support if the breakout is more than just a bull trap. One caveat to the current breakout is the fact that momentum indicators have not yet made new highs along with price. This could be foreshadowing a bearish divergence with price but that will not be confirmed until price falls below a former corrective low like $8.87 on Aug. 19. These issues considered, a full bullish policy remains advised in natural gas with a failure below $8.87 needed to warrant moving to a neutral or even bearish stance. 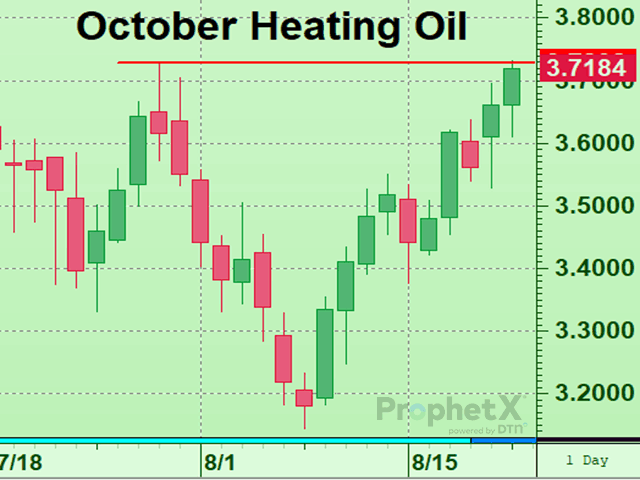