December soybean oil closed up 4 cents last week, ending at 67.97 on Friday, Aug. 12, and was also the leading percentage gainer among contracts in the grain-related sector. The 24-cent sell-off from June 8 to July 14 was largely due to noncommercial selling and concerns about outside markets. The selling ended abruptly, however, and now prices have turned higher with help from increased recent support for both palm oil and crude oil. Technically speaking, the weekly stochastic indicator shows a bullish change in momentum and December soybean oil closed above its 50% retracement on Friday. Prices may find resistance at 68 cents, the site of the 100-day average, but the trend of downward momentum has been broken.


December soybean meal closed up $12.80 last week, ending Friday, Aug. 12, at $417.90, near its highest prices to date. December soybean meal has been trading in a narrow, sideways range since February and closed at a new three-month high in late July. Spot soybean meal prices are trading far above the futures board, indicating strong commercial demand for meal supplies in tight supply. Technically speaking, December soybean meal appears to be emerging from a five-month corrective pattern with a potential breakout to the upside, supported by a bullish change in the weekly stochastic. The recent changes for both, soybean oil and soybean meal are also supportive for soybean prices.


November soybeans closed up 45 1/2 cents last week ended at $14.54 1/4 on Friday, Aug. 12. The speculative selling that took down soybean prices in late June and early July was more about outside market concerns like rising interest rates and a fear of recession but failed to notice the strong demand environment soybeans are operating in this summer and potential risks to yield from hot and dry weather in several growing areas. The sell-off ended on July 22 and it hasn't taken prices long to start trading higher again as prices finished Friday $1.66 above the July low. Technically speaking, the sharp sell-off and quick recovery have the trend currently neutral with resistance likely at $14.62, the site of the 100-day average. The weekly stochastic shows a bullish change in momentum with yields still at risk and demand for soy products offering support. 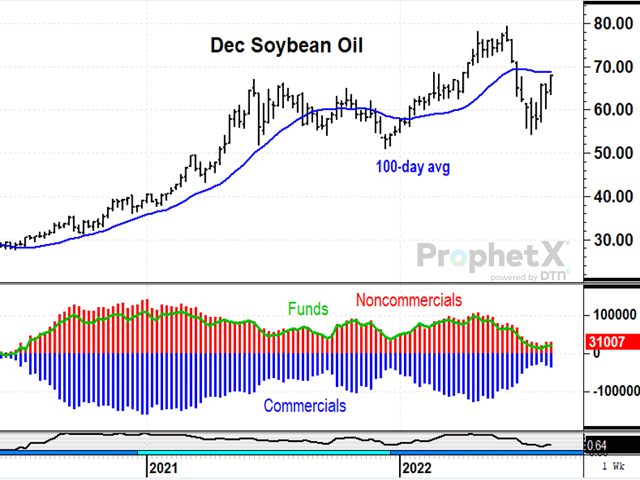