Class III Milk: The June contract closed $0.49 higher at $15.56. The market extended its secondary (intermediate-term) uptrend to last week's high of $15.75, above technical resistance at $15.29. This price marks the 23.6% retracement level of the previous downtrend from $25.30 through the low of $12.20. However, weekly stochastics are now near 90% indicating a sharply overbought situation and putting the market in position for a bearish turn.

Soybean meal: The July contract closed $1.60 lower at $393.70. After posting a new high of $406.50, last week's lower close looks to have established a bearish spike reversal. If so, this would indicate the contract's secondary (intermediate-term) trend is now down. Weekly stochastics are bullish above the overbought level of 80%, in position for another bearish crossover. 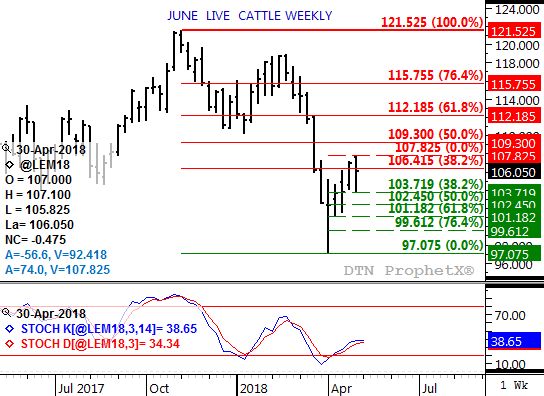