Oats: The July 2018 contract closed at $2.35, up 3 cents for the week. The contract still looks to be in a secondary (intermediate-term) uptrend based on the previous week's spike reversal. However, the lack of solid follow-through buying last week is a concern, leaving the door open to a test of the previous week's low of $2.20 3/4. Another issue is week stochastics did not establish a bullish crossover below the oversold level of 20% as the contract rallied.

Rice: The July 2018 contract closed at $12.930, down 7 1/2 cents for the week. The contract consolidated within the previous week's range last week, still indicating a potential topping patter is forming. Recall that weekly stochastics established a bearish crossover above the overbought level of 80% the previous week, a signal that the secondary (intermediate-term) trend was set to turn down. Initial support and resistance is at the previous week's extremes of $12.815 and $13.28.

Coffee: The July 2018 contract closed at 122.60 (cents per pound), up 0.20 cents for the week. While the contract remains in a 5-wave secondary (intermediate-term) uptrend, last week's pull back from its high of 125.95 could be signaling a Wave 1 peak. If so, Wave 2 would be expected to retrace nearly all the way back to the previous low of 115.30. Weekly stochastics remain bullish following a crossover below the oversold level of 20% the week of April 9.

Sugar: The July 2018 contract closed at 11.51 (cents per pound) down 0.01 cent for the week. Despite its lower weekly close the contract remains in position to move into a secondary (intermediate-term) uptrend based on the bullish crossover by weekly stochastics below 20% the week of April 23. Initial resistance is at the 4-week high of 12.46 with support at the recent low of 10.93.

Cocoa: The July 2018 contract closed at $2,777 (per metric ton), down $54 for the week. The contract looks to be moving into a secondary (intermediate-term) downtrend as it continues to consolidate below its recent high of $2,943. Weekly stochastics established an initial bearish crossover above the overbought level of 80% the week of April 2, and a confirming crossover at the end of last week. 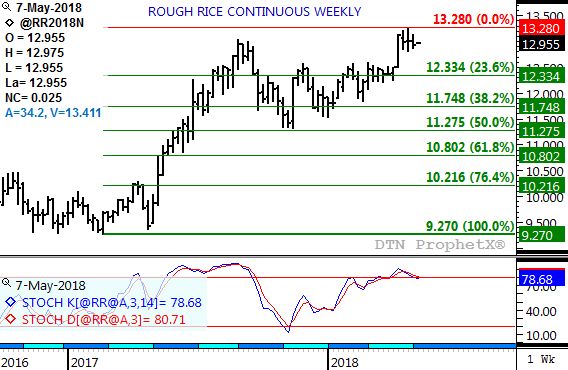