SRW Wheat (Cash): The DTN National SRW Wheat Index (SR.X, national average cash price) closed at $4.94, up 29 cents for the week. Looking at the trends of the SR.X again, it could be argued that cash SRW is in Wave 5 of s secondary (intermediate-term) 5-wave uptrend. Last week's settlement of $4.94 puts it within striking distance of the previous high of $5.02 (week of July 3, 2017). The market is vulnerable to the establishment of a secondary downtrend, given the series of bearish crossovers above the overbought level of 80% by weekly stochastics.

SRW Wheat (New-crop Futures): The Chicago July 2018 contract closed at $5.26 1/4, up 27 3/4 cents for the week. July Chicago wheat posted a new high of $5.38 1/2 for this move last week, moving toward a test of resistance near $5.43 1/2. Given this new high, the market remains vulnerable to a move to a secondary (intermediate-term) downtrend making last week's high the peak of the previous 5-wave uptrend.

HRW Wheat (Cash): The DTN National HRW Wheat Index (HW.X, national average cash price) closed at $5.10 up 34 cents for the week. Cash HRW wheat extended its secondary (intermediate-term) uptrend, settling at its highest level since July 2015 last week. Though no topping patterns have been established on the weekly close-only chart, the strength of the rally in cash HRW increases its vulnerability to increased selling.

HRW Wheat (New-crop Futures): The Kansas City July 2018 contract closed at $5.55 3/4, up 25 1/4 cents for the week. July KC wheat posted a bullish breakout last week, moving to a new high on its weekly chart that could signal the peak of Wave 5 of its secondary (intermediate-term) 5-wave uptrend. The contract once again found resistance near $5.62 3/4, last week's high was $5.68 1/2, with the former the 67% retracement level of the previous downtrend from $6.23 through the low of $4.40 1/4. The contract's minor (short-term) trend on its daily chart turned down late last week.

HRS Wheat (Cash): The DTN HRS Wheat Index (SW.X, national average cash price) closed at $6.11, up 15 cents for the week. The secondary (intermediate-term) trend for cash spring wheat could still be considered sideways. Though it has moved outside its previous range from $5.82 to $6.05, it remains within the wider range between $6.19 (close the week of November 6, 2017) and $5.62 (week of March 26). A breakout in either direction would establish the next trend. 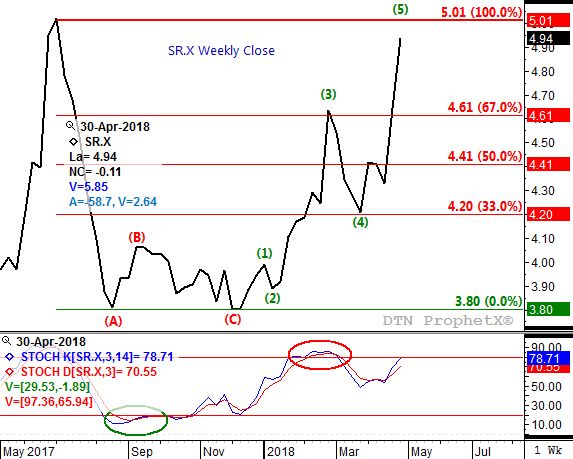