Lean Hogs: The June contract closed $4.925 lower at $72.625. June lean hogs are following general trend patterns closely, with last week's sell-off looking to be Wave 2 of a 5-wave secondary (intermediate-term) uptrend. A characteristic of Wave 2 is an almost complete retracement of Wave 1, with last week's low of $72.475 a test of the Wave 1 retracement level near $72.40. Key to the uptrend is the contract not falling below the low from its previous 3-wave downtrend at $70.25.

Class III Milk: The May contract closed $0.17 higher at $15.07. The market's secondary (intermediate-term) uptrend looks to be nearing its end as the May contract tests resistance at $15.29. This price marks the 23.6% retracement level of the major (long-term) downtrend from $25.30 (September 2014) through the low of $12.20 (May 2016). Weekly stochastics remain above the overbought level of 80%, putting this momentum study in position for a bearish crossover.

Soybean meal: The July contract closed $16.70 higher at $395.30. Technically July soybean meal remains in a secondary (intermediate-term) uptrend, remaining within its range between the high of $400.60 and support at $362.70. However, with soybean meal's forward curve inverted, reflecting bullish fundamentals, a bullish breakout seems imminent. If such a move is seen, next major (long-term) resistance is up at $433.70.

Corn (Cash): The DTN National Corn Index (NCI, national average cash price) closed at $3.60, up 15 cents for the week. The NCI took out its previous double-top near $3.54, also erasing a potential head-and-shoulders pattern on its weekly close-only chart. Despite weekly stochastics already well above the overbought level of 80% the NCI has extended its secondary (intermediate-term) uptrend. Next major (long-term) resistance is up near $4.00 on the monthly chart. 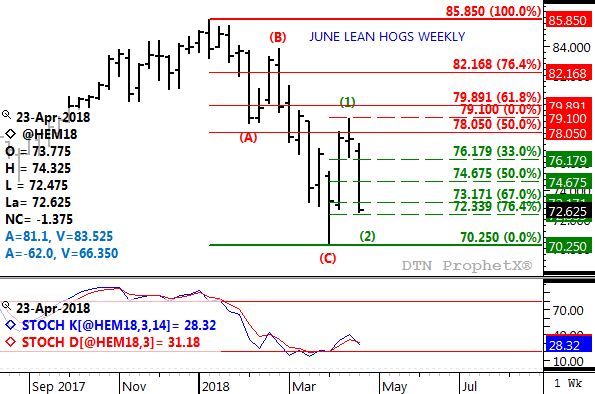