Oats: The July 2018 contract closed at $2.32, down 4 cents for the week. Despites the lower weekly close, July oats look to have posted a bullish spike reversal of its new low of $2.20 3/4. The rally off this mark to close the week was enough to establish a bullish crossover by weekly stochastics below the oversold level of 20%. This indicates the contract is in position to begin a secondary (intermediate-term) uptrend with initial resistance near $2.47. The price marks the 33% retracement level of the previous downtrend from $3.00 1/2 through last week's low.

Rice: The July 2018 contract closed at $13.005, up 1 1/2 cents for the week. The contract posted a new high of $13.28 last week before falling back. Though establishing an outside weekly range, the contract still looks vulnerable to posting a secondary (intermediate-term) top with weekly stochastics showing a bearish crossover above the overbought level of 80% last week.

Cotton: The July 2018 contract closed at 84.51 (cents per pound), down 0.22 cent for the week. The contract continues to show a possible head-and-shoulders top formation on its weekly chart, implying a move to a secondary (intermediate-term) downtrend. This potential pattern was strengthened last week as July cotton posted a bearish outside week. Weekly stochastics established a bearish crossover above the overbought level of 80% the week of January 8, 2018, and a confirming bearish crossover the week of January 22.

Coffee: The July 2018 contract closed at 122.40 (cents per pound), up 4.70 cents for the week. July coffee built off the previous week's bullish crossover by weekly stochastics below the oversold level of 20%, confirming the spike reversal with a move to a new 4-week high of 122.50 last week. Initial resistance for the new secondary (intermediate-term) uptrend is at 132.94, a price that marks the 23.6% retracement level of the previous downtrend from 190.05 through the recent low of 115.30.

Sugar: The July 2018 contract closed at 11.52 (cents per pound) down 0.35 cent for the week. Despite its lower weekly close the contract posted what looks to be a spike reversal, closing well off its low of 10.93. This led to a bullish crossover by weekly stochastics below the oversold level of 20%, putting the contract in position to begin a secondary (intermediate-term) uptrend. Confirmation of this change would be a move to a new 4-week high beyond 12.65.

Cocoa: The July 2018 contract closed at $2,831 (per metric ton), up $102 for the week. The contract extended its secondary (intermediate-term) uptrend last week, hitting a high of $2,943 before falling back. Next major (long-term) resistance is at $3,011, though weekly stochastics remain above the overbought level of 80%. 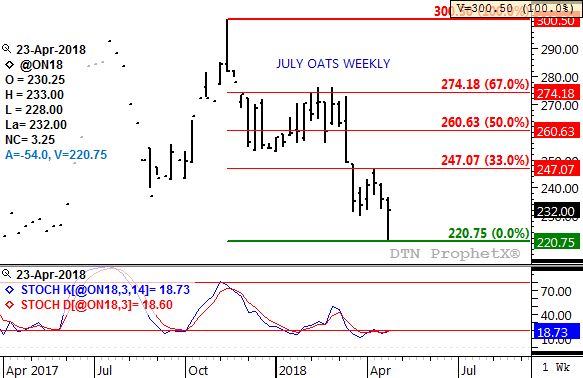