Live Cattle: The June contract closed $0.075 higher at $103.725. June live cattle could still be considered in the early stages of a secondary (intermediate-term) 5-wave uptrend. However, the rally seen off the recent low of $97.075 could be considered Wave 1 that resulted in a test of resistance near $106.425. Last week's high was $106.175. If so Wave 2 would be expected to retrace most of Wave 1 over the coming weeks. This should also be enough to pull weekly stochastics below the overbought level of 20%, setting up a potential bullish crossover.

Feeder Cattle: The August contract closed $0.60 lower at $144.50. While the contract remains in a secondary (intermediate-term) 5-wave uptrend, last week's lower weekly close could lead to a sell-off over the coming weeks. Such a move would be considered Wave 2 of the uptrend, with nearly a full retracement of Wave 1 from the low of $135.00 through last week's high of $146.776 possible.

Class III Milk: The May contract closed $0.20 higher at $14.90. The market's secondary (intermediate-term) uptrend looks to be nearing its end as the May contract tests resistance at $15.29. This price marks the 23.6% retracement level of the major (long-term) downtrend from $25.30 (September 2014) through the low of $12.20 (May 2016). Weekly stochastics have climbed back above the overbought level of 80%, putting this momentum study in position for a bearish crossover.

Soybean meal: The July contract closed $8.20 lower at $378.60. The contract's secondary (intermediate-term) trend remains sideways between resistance at the recent high of $400.60 and support at $362.70. The latter marks the 38.2% retracement level of the previous uptrend from $301.40 through the $400.60 high. Weekly stochastics are holding near the overbought level of 80%.

Corn (Cash): The DTN National Corn Index (NCI, national average cash price) closed at $3.45, down 8 cents for the week. The NCI has a double-top formation in place between its previous high of $3.57 and the recent peak of $3.56. A new secondary (intermediate-term) 3-wave downtrend would be confirmed if cash corn falls below the interim low of $3.37, a price that was also a test of support at the 33% retracement mark of the previous uptrend from $2.95 through the $3.57 high. The NCI also left a bearish gap between the previous week's low of $3.52 and last week's high of $3.50. This could be considered a breakaway gap, another bearish technical indicator for cash corn. 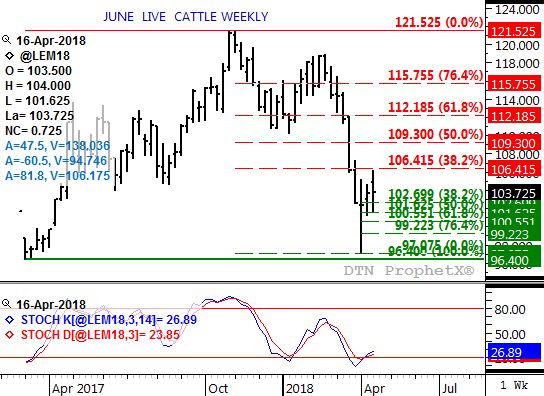