Distillates: The spot-month contract closed 2.28cts higher at $2.1230. The market still looks to be in a secondary (intermediate-term) downtrend with the spot-month contract sitting below the previous high of $2.1431. The upturn seen the last three weeks could still be considered Wave B (second wave) of a 3-wave downtrend. However a move to a new high, similar to what was seen in crude oil recently, would suggest a resumption of the previous uptrend.

Gasoline: RBOB gasoline futures market closed 3.05cts higher at $2.0959. The market extended its secondary (intermediate-term) uptrend as the spot-month contract posted a new high of $2.0987. Next major (long-term) resistance on the monthly chart is at $2.1882. However, weekly stochastics are already above 90% indicating a sharply overbought market.

Ethanol: The spot-month contract closed 1.1cts higher at $1.400. The market remains in a secondary (intermediate-term) uptrend as the nearby futures contract continues to rally off its test of support at $1.393 the previous week. Next resistance is at $1.566, then $1.640.

Natural Gas: The spot-month contract closed 0.4ct higher at $2.739. Though the market still looks to be in a sideways pattern marking the end of its previous downtrend, weekly stochastics posted a bullish crossover below the oversold level of 20%. This would suggest the spot-month contract is set for a bullish breakout, most likely being a move above the previous high of $2.811. If the sideways pattern between $2.811 and $2.530 is broken, the upside projection would be a test of resistance at $3.084, a price that marks the 38.2% retracement of the previous downtrend from $3.994 through the low of $2.521. 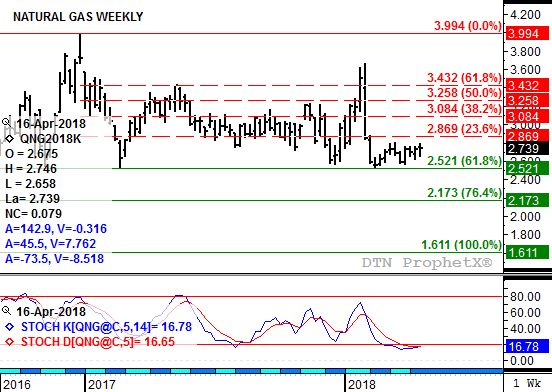