Feeder Cattle: The August contract closed $3.65 higher at $145.10. The contract looks to be in a newly established secondary (intermediate-term) 5-wave uptrend. However, a test of resistance at $147.10, a price that marks the 50% retracement level of the previous downtrend from $159.20 through the low of $135.00, could mark a quick end to Wave 1 and beginning of Wave 2. The second wave often sees an almost complete retracement of Wave 1. If this occurs it could pull weekly stochastics below the oversold level of 20% and in position for a bullish crossover.

Lean Hogs: The June contract closed $4.375 higher at $77.65. Similar to feeder cattle (see above) the June lean hog contract looks to have posted a quick Wave 1 of its recently established secondary (intermediate-term) 5-wave uptrend. Last week's high of $78.10 was a test of resistance at $78.05, a price that marks the 50% retracement level of the previous downtrend from $85.85 through the low of $70.25. Wave 2 could see an almost complete retracement of Wave 1, and likely to pull weekly stochastics below the oversold level of 20%.

Corn (Cash): The DTN National Corn Index (NCI, national average cash price) closed at $3.52, down 2 cents for the week. The NCI looks to have established a double-top between its previous high of $3.57 and last week's peak of $3.56. A new secondary (intermediate-term) 3-wave downtrend would be confirmed if cash corn falls below the interim low of $3.37, a price that was also a test of support at the 33% retracement mark of the previous uptrend from $2.95 through the $3.57 high. 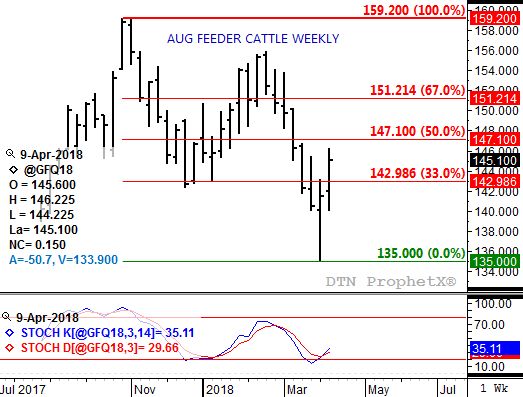