Distillates: The spot-month contract closed 14.24cts higher at $2.1002. Despite its higher weekly close, distillates remain in a secondary (intermediate-term) downtrend with the recent minor (short-term) uptrend looking to be Wave B (second wave) of a 3-wave downtrend. Wave C (third wave) is expected to move below the Wave A low of $1.8084, with next support down at $1.6486. This price marks the 38.2% retracement level of the previous uptrend from $0.8487 through the high of $2.1431.

Gasoline: RBOB gasoline futures market closed 11.07cts higher at $2.0654. The market looks to have returned to its previous secondary (intermediate-term) uptrend as the spot-month contract posted a new high of $2.0788. Next major (long-term) resistance on the monthly chart is at $2.1882. However, weekly stochastics are near 90% indicating a sharply overbought market.

Ethanol: The spot-month contract closed 5.4cts higher at $1.488. The market moved back into its secondary (intermediate-term) uptrend as the nearby futures contract rallied off its test of support at $1.393 the previous week. Next resistance is at $1.566, then $1.640.

Natural Gas: The spot-month contract closed 3.4cts higher at $2.735. Though the market still looks to be in a sideways pattern marking the end of its previous downtrend, the spot-month contract posted a bullish outside range last week. This, combined with weekly stochastics below the oversold level of 20% would suggest the market could see increased bullish momentum over the weeks ahead. Support remains at $2.521. 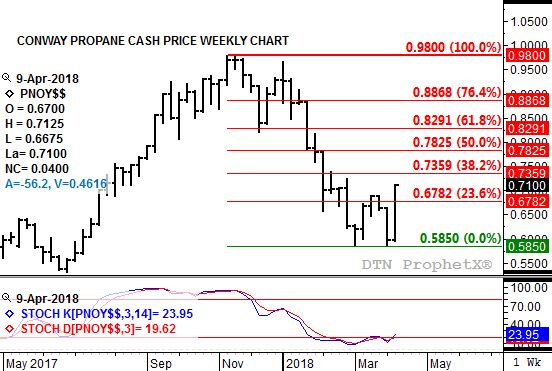