Just over a week ago I posted the blog, "July KC Wheat Posts Bullish Signs". At the time the contract had just left a bullish breakaway gap on its daily chart following the previous day's bullish reversal, both in conjunction with a bullish crossover by daily stochastics below the oversold level of 20%. The idea was a move above its previous high of $5.04 would set in motion an extended rally that should test retracement resistance at $5.35 1/2 based on the Flipped Range Theory.

As you can see on the updated daily chart, July KC wheat rallied to a high of $5.47 3/4 this past Monday, leaving another bullish gap (space between blue lines) and shooting past the 67% retracement mark to test the 76.4% level near $5.44. Also note Monday's close came in at $5.41 3/4. Since then the contract has been consolidating within Monday's range of $5.47 3/4 to $5.29 3/4, sitting near the low end as overnight trade comes to an end early Wednesday morning.

If the contract stays under pressure throughout Wednesday's session, and closes near its daily low, it would set up a possible Island Top formation, needing only a sustained gap lower Wednesday night into Thursday morning.

Daily stochastics (bottom study) have been pulled above the overbought level of 80% and are in position for a bearish crossover. However, given how close to 80% this study is, such a crossover could actually occur below the overbought mark signaling the next sell-off could last but a few days, with initial support near $5.24, then $5.12. 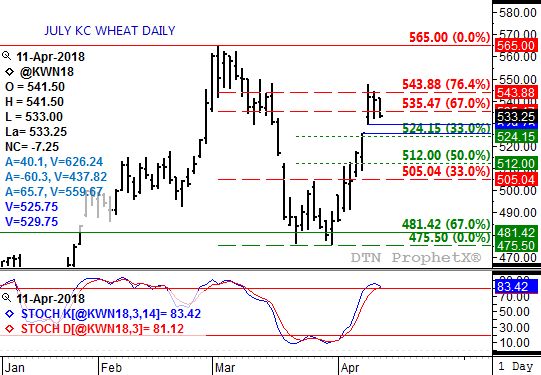