Live Cattle: The February contract closed $2.975 higher at $121.55. The contract remains in a 3-wave secondary (intermediate-term) downtrend with the ongoing rally Wave B (second wave). This move has the contract testing resistance near $123.075, with additional resistance near $124.75 and $126.50. Weekly stochastics are bearish but above the oversold level of 20%, indicating the contract has room to extend its downtrend to the next secondary target near $113.90.

Feeder Cattle: The March contract closed $4.125 higher at $142.675. The contract remains in a secondary (intermediate-term) 3-wave downtrend, with last week's rally the beginning of Wave B (second wave). Initial resistance is near $143.175, though last week may be the first of an expected 3 week rally against the trend. If so March feeders would be expected to test resistance between $146.175 and $148.625. Weekly stochastics remain bearish but above the oversold level of 20%.

Lean Hogs: The February contract closed $1.80 higher at $71.775. The contract's secondary (intermediate-term) trend turned at least sideways with last week's rally, needing a move beyond the previous high of $73.30 to reestablish a secondary uptrend. Weekly stochastics are now bullish below the overbought level of 80%, with the most recent signal a bearish crossover above 80% the week of November 6.

Corn (Cash): The DTN National Corn Index (NCI, national average cash price) closed at $3.15 1/2, up 1/2 cent for the week. Cash corn's secondary (intermediate-term) uptrend continues to strengthen on its weekly close-only chart. Next resistance is near $3.18 3/4, a price that marks the 38.6% retracement level of the previous downtrend from $3.48 through the low of $3.00. Weekly stochastics have moved above the overbought level of 80%, in position for a bearish crossover that would signal the end of the secondary uptrend. 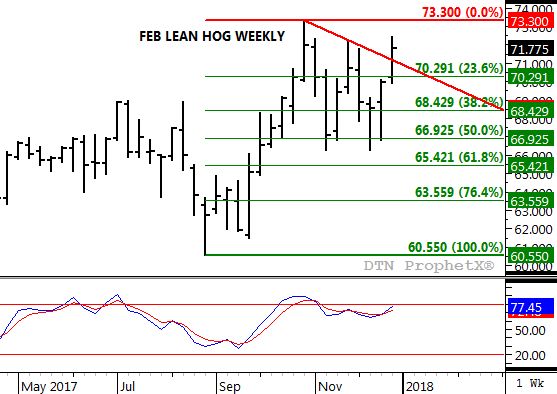