Lean Hogs: The February contract closed at $69.775, up $1.775 on the monthly chart. The market looks set to resume its major (long-term) uptrend after the futures market posted a bullish outside month during November. However, much of this was due to a stronger than normal spread ($5.50) between the December and February futures as the latter became the more active contract and registered on the monthly chart. Therefore, the market needs to confirm November's bullish signal before projections can be made regarding upside targets.

Soybean meal: The more active January contract closed at $326.50, up $14.70 on the continuous monthly chart. The market is nearing a turn to a major (long-term) uptrend, a move that could be confirmed by a new 4-month high above the November peak of $331.90. Monthly stochastics are growing more bullish, indicating the stronger likelihood of a bullish breakout. If so initial resistance remains up at $367.00. 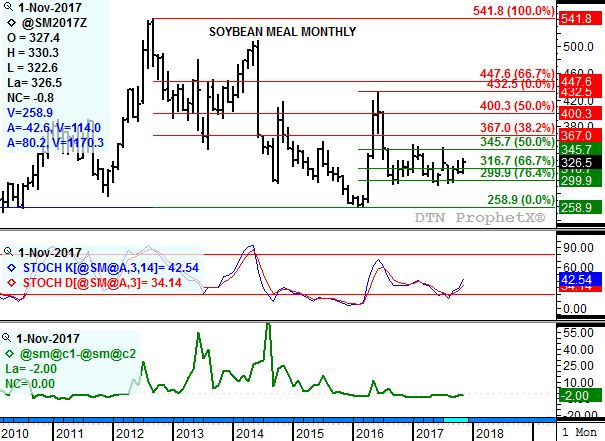