Lean Hogs: The December contract closed at $68.00, up $8.05 on the monthly chart. The major (long-term) trend looks to be sideways with a wide range between resistance at $87.05 and support at $57.75. Monthly stochastics are neutral-to-bearish near the mid-point of the 20% (oversold) to 80% (overbought) range.

Corn (Cash): The DTN National Corn Index (NCI.X, national average cash price) closed at $3.03 1/4, down 6 1/2 cents for the month. The major (long-term) trend remains sideways-to-down. The last three long-term highs have been lower, as have the last two major lows. This would suggest that the August 2016 low of $2.73 is a long-term target. October saw the NCI.X post a range of only 8 1/4 cents as market volatility continues to decrease. Monthly stochastics are neutral-to-bearish near the oversold level of 20% indicating bearish momentum is still possible.

Soybean meal: The more active December contract closed at $311.80, down $4.00 on the continuous monthly chart. The market still looks to be in a major (long-term) narrowing sideways trend. Support remains at $299.90, the 76.4% retracement level of the previous rally from $258.90 (February 2016) through the high of $432.50 (June 2016). Trendline resistance comes in at $346.20 during November. Monthly stochastics are neutral-to-bullish, near the oversold level of 20% indicating bullish momentum could start to strengthen. 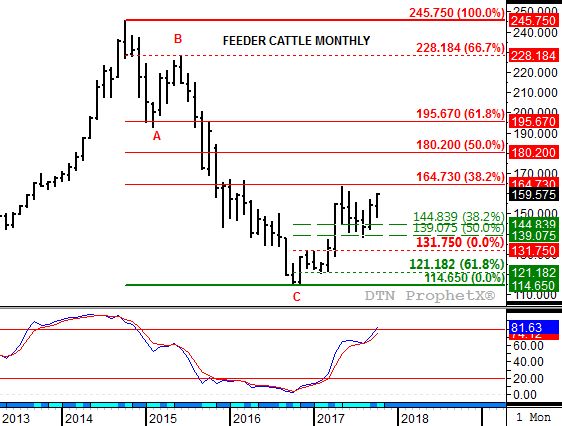