Ethanol: The spot-month contract closed 0.9ct higher at $1.395. With the nearby futures contract holding above its previous low this past week, the market may have seen its secondary (intermediate-term) trend turn sideways. With support at the previous week's low of $1.384, ethanol could be nearing a turn to an uptrend as weekly stochastics are in position for a bullish crossover below the oversold level of 20%.

Natural Gas: The spot-month contract closed 16.3cts lower at $2.752. The secondary (intermediate-term) trend remains sideways between resistance at $3.084 and support at $2.803. Last Friday's close below support at the expiration of the November contract needs to be discounted for now.

Propane (Conway cash price): Conway propane closed 6.62cts higher at $0.9300. Cash propane returned to a secondary (intermediate-term) uptrend on its weekly chart, moving to a new high of $0.9325. Next major (long-term) resistance is at $1.0126 on its monthly chart. 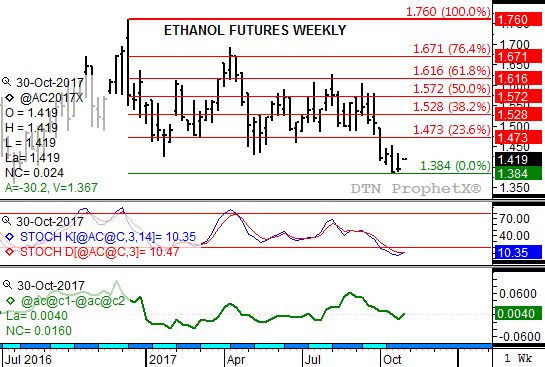