Live Cattle: The December contract closed $4.225 higher at $120.825. The contract's secondary (intermediate-term) uptrend strengthened last week, rallying off a recent test of support near $114.425. Next secondary resistance is at the previous high of $122.85. Weekly stochastics have climbed back to the overbought level of 80%, though not in position for a bearish crossover.

Feeder Cattle: The more active January contract closed $4.625 higher at $155.95. The contract's secondary (intermediate-term) trend turned up as Jan feeders posted a bullish outside week last week. Like many markets, the contract is seeing more late-month influence from the major (long-term) uptrend on its monthly chart. The next major target is $164.725 a price that marks the 38.2% retracement level of the previous downtrend from $245.75 (October 2014) through the low of $114.65 (October 2016).

Lean Hogs: The December contract closed $0.40 lower at $64.45 last week. Taking a big picture look at the contract's secondary (intermediate-term) chart shows a wide-ranging sideways trend. Resistance is $65.675 from the week of July 3, 3017, support $55.775 from the week of August 28. Note that weekly stochastics continue to cycle between the oversold level of 20% and overbought level of 80%, filing to move below or above these levels to establish crossovers.

Corn (Cash): The DTN National Corn Index (NCI.X, national average cash price) closed at $3.05 1/2, up 5 cents for the week. The secondary (intermediate-term) downtrend in the NCI.X looks to have been replaced with a sideways trend. The NCI.X continues to hold support at $3.00, a price that marks the 76.4% retracement level of the previous uptrend from $2.85 1/4 through the high of $3.48. Weekly stochastics remain bullish after posting a crossover below the oversold level of 20% the week of August 28.

Soybean meal: The December contract closed $5.00 lower at $312.10. The contract looks to be in secondary (intermediate-term) and major (long-term) sideways trends. Support this month on the long-term monthly chart is calculated at $309.20 while resistance is at $346.20. 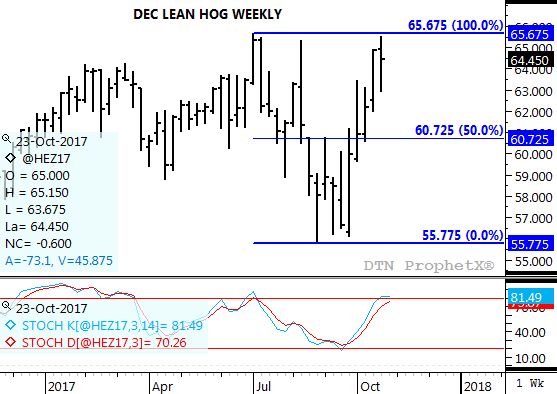