Brent Crude Oil: The spot-month contract closed at $52.38, down $0.27 on the monthly chart. While the last major turn signal on the market's monthly chart was bearish, indicating the major (long-term) trend is down, Brent crude continues to consolidate between support at $42.73 and resistance at $58.37. If the market sees a bullish breakout of this range it should lead to a test of resistance up at $77.75. A bearish breakout should lead to a test of the major low at $27.10 (January 2016).

Distillates: The spot-month contract closed at $1.7575, up 10.56cts on the monthly chart. The market looks to have returned to its previous major (long-term) uptrend as it posted a new 4-month high of $1.7635. Resistance could still be found at $1.8118 as monthly stochastics again approach the overbought level of 80%.

Gasoline: The Chicago cash RBOB market closed at $1.9242, up 20.76cts on its monthly chart. The market remains in a major (long-term) sideways-to-up trend. Chicago cash RBOB posted a new 4-month high of $1.9577 as the futures market skyrocketed following Hurricane Harvey. Support is at the 4-month low of $1.4378.

Propane (Conway cash price): Conway propane closed at $0.7388, up 3.88cts on its monthly chart. The secondary (intermediate-term) uptrend looks to be Wave B (second wave) of the ongoing major (long-term) 3-wave downtrend that began with the bearish reversal posted in February 2017. Cash propane is testing resistance at $0.7846, a price that marks the 67% retracement level of Wave A. Wave C has a target price of $0.4714. 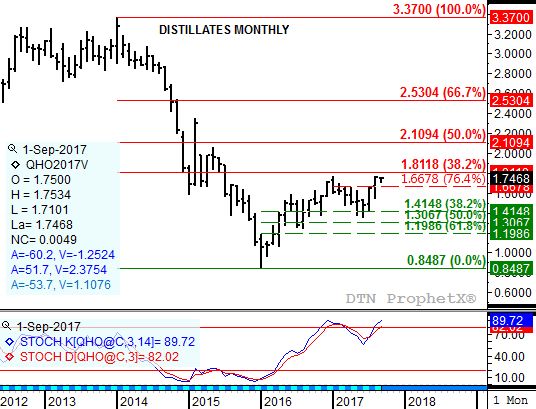